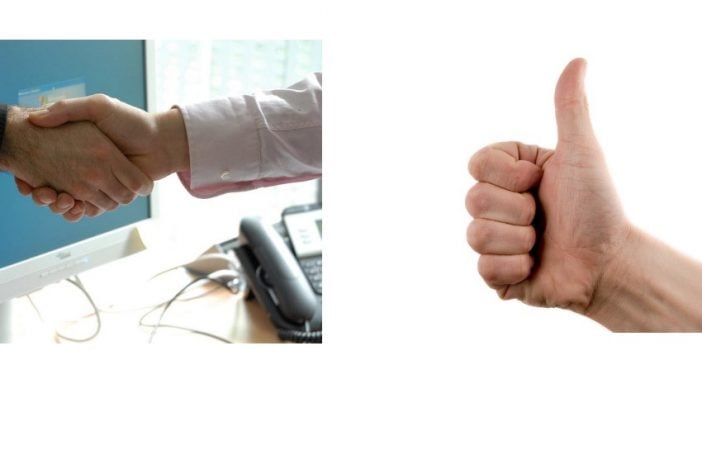 For a lot of us, the hand gestures have become a reflex action that goes along with verbal language. They add to the message we want to communicate by filling the void that words sometimes leave behind and also give us something to do without hands when talking.

But are you aware of the history that goes behind some of these popular hand gestures? Probably not. Have a read through these incredible facts that trace the history of famous hand gestures that mean different things in different places and contexts.

There is no denial of the fact that the handshake is the most formal and widely acknowledge gesture of respect and courtesy. However, this gesture is anything but a modern invention. The handshake dates back to Ancient Greece! A funeral stone from as long ago as the 5th century BC in Pergamon Museum in Berlin shows two soldiers shaking hands. The Greek mythology also has a depiction of this universal gesture showing Hera (Zeus’s wife and sister) shaking hands with the Goddess of Wisdom, Athena. This can be found at the end of a column in the Acropolis Museum in Athens.

What the gesture then suggested was a feeling of openness and comfort in the presence of the person one was shaking hands with. By showing empty palms, one confirms that there are no weapons in his/her possession and is absolutely comfortable being around them.

You’ll be surprised to learn how very different meanings the same sign (when flipped around) could convey. The V sign has two different meanings, depending on which side of the hand you’re showing up. If it is the back of your hand doing the V sign, it translates to the rude “up yours” in England. Make sure you remember this while touring around London!

But the popular version is the palms outward one. This is the most famous victory/peace sign that got in vogue during the World War 2 era. It means the same even today. This sign also had a meaning in the Ancient Rome, albeit a neutral one. The V sign in Ancient Rome meant the number 5. Just two fingers making a basic gesture, but with tons of meanings and connotations!

3. Thumbs Up and Down

Thumbs up did not have the positive quality to it in history that it does today. Maybe you’re familiar with the popular version of this hand gesture, tracing it back to the Roman history. When a gladiator lost, the crowd would either stick its thumb out in order to have him killed or just not do any sign at all. The thumbs decided the gladiator’s fate.

However, over the years, the thumbs up signal meant giving something a go, or basically saying that something was the first rate. The British used the sign to confirm a business deal. The French used to it to begin counting something. It slowly came to take up the connotation of a certain thing being number one. Post-WWII, the gesture of thumbs up only came to mean that things were going splendidly. And thumbs down meant the contrary.

This quick gesture that involves a movement up to the forehead and back to the sides has an interesting evolutionary theory. Well, there are theories to be precise, but the most accountable one comes from the British etiquette of removing a hat in someone’s presence. It was considered rude to have your hat on when talking to someone, especially a superior because it meant that you don’t want them to see your whole face. Hence, the hat removal to show respect. As times progressed, the gesture was quickened to just a small tip of the hat in imitation of attempting to remove it. Later, it was given an even simpler form of the salute as we are aware of today.

5. The More Modern Ones

The modern versions of hand gestures of greeting are high-five’s and fist bumps. The high-five is said to have originated from one of U.S’s baseball teams. Or it could have come from the plenty of high-fives the stock exchange brokers keep giving each other. The fist bumps also have an origin in sports. They began as a copying gesture of how people touched gloves before a boxing match. From there it spread to the basketball arena, to the players as well as the fans.

The list of hand gestures is pretty long. But these were some of the most famous ones that we tend to use almost daily. When words fail, gestures come to the rescue!

Learned some interesting facts today? Pass it along to all the history buffs you know.