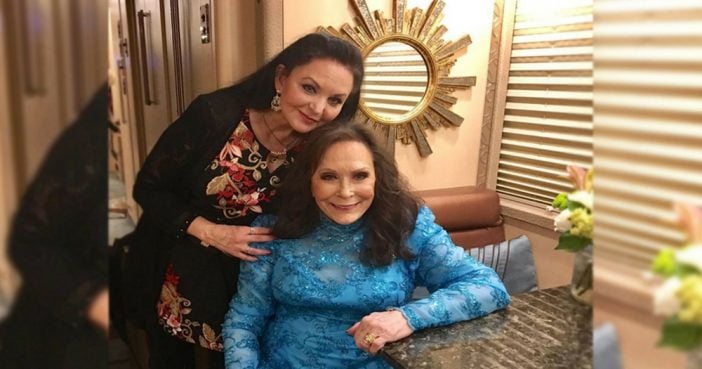 Loretta Lynn fell and fractured her hip, but she is doing “as well as can be expected.” Lynn’s sister, Crystal Gayle, shared the news via Twitter on Monday (Jan. 8), asking for love and prayers for her 85-year-old sister.

“I was with Loretta yesterday,” Gayle writes. “She is in good spirits and is doing as well as can be expected with this type of injury.”

An official statement on Lynn’s social media says she is recovering, but “doing well and thanks all her fans for their thoughts and prayers.”

American music icon, Loretta Lynn is recovering from a fractured hip after a fall while at home. She is doing well and thanks all her fans for their thoughts and prayers. pic.twitter.com/wBSpJGZBob

There are no events on Lynn’s official schedule. After her May 4 stroke, the country legend cleared her calendar and pushed back an album slated for last August to 2018. By all accounts, she had been recovering well after the stroke, even performing at the Tennessee Motorcycle and Music Revival in September.

Lynn is universally loved as one of country music’s all-time great singers with pull-no-punches hits like “The Pill,” “Fist City” and “You Ain’t Woman Enough.” The Country Music Hall of Famer has been beset by health troubles over the last five years, but in each case, she’s returned to the stage and recording studio.

“I think you try to do better with every record you put out,” Lynn said about the planned, but still unreleased Wouldn’t It Be Great album. “It’s just everyday living — and everybody wants to know, ‘Well, what is it about your songs that people like?’ I think you’ve got to tell your stories.”