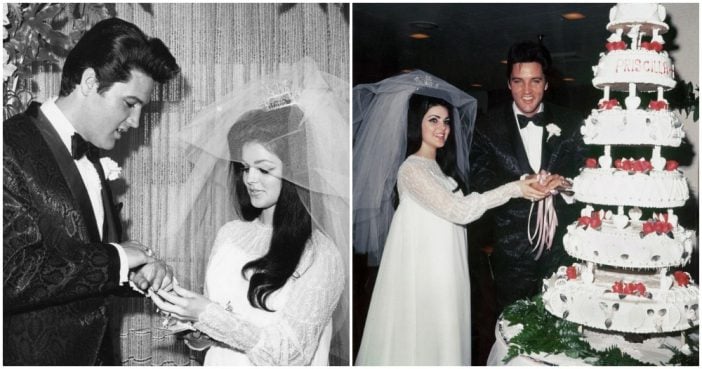 On May 1, 1967, the real Elvis Presley, King of Rock ’n’ Roll, married his girlfriend of many years, Priscilla Beaulieu, far from Graceland, at the Aladdin Hotel in Las Vegas. There were no impersonators in sight, but there were members of the press, who were invited by the star’s manager to a press conference between the intimate ceremony and champagne breakfast for 100 that followed. Though relatively discreet for a celebrity wedding, this was one for the books. Forty-nine years after Elvis and Priscilla said “I do” (but not “I obey”), we revisit, in detail, the couple’s big day.

Priscilla Beaulieu was 14 in 1959 and living in West Germany when a friend of Elvis’s saw her in a restaurant and invited her to meet the heartthrob, then enlisted in the Army and living off base with his father in Wiesbaden. “I just wore a little sailor dress because I still didn’t believe it,” Priscilla later told UPI. A relationship blossomed that was resumed when she returned to the States (despite the singer/actor’s ongoing involvements with other women). By 1962, Priscilla was installed at Graceland with Elvis and his family and completed her senior year at the all-girls Immaculate Conception Cathedral High School in Memphis.

Before Christmas in 1966, Elvis, on bended knee in the bedroom, proposed with a three-and-a-half-carat diamond ring, with 20 surrounding, detachable diamonds, from Memphis jeweler Harry Levitch. “It was very relaxed,” Priscilla would later tell Becky Yanky, Elvis’s private secretary and author of My Life With Elvis. “He just told me about the ring one day and asked if I wanted to marry him. ‘More than ever,’ I told him.” Soon after the ceremony, Elvis would joke: “Well, I guess it was about time. With the life I had, I decided it would be best to wait.”

Getting to the “Church” On Time—and In Secret

The wedding was arranged by Colonel Tom Parker, Elvis’s manager, who gathered the players in Palm Springs in advance of the big day. “Just after midnight on May 1, [1967],” recalls Elvis’s school friend George Klein in his memoir, “the wedding party snuck out the back door of Elvis’s Palm Springs home, climbed over the backyard wall, and got into a car to head to the airport. Elvis had been loaned Frank Sinatra’s private jet for the occasion.” A second chartered plane carried the rest of the guests. As a wedding gift, Elvis flew Priscilla’s parents in. Once arrived, the party was taken to the Aladdin Hotel, where they used the rear entrance to avoid detection.

In the wee hours of the morning, Elvis and Priscilla have issued a marriage license at the Las Vegas Courthouse. Just before 10 a.m., Nevada Supreme Court Judge David Zenoff married the couple in a flower and candle-filled suite at the Aladdin in front of about 14 people. Elvis’s best men (to whom he presented diamond-eyed bull’s head cuff links and tie clasps as gifts) were Joe Esposito and Marty Lacker; Priscilla’s maid of honor was her sister, Michelle. Parker, who had arranged for two MGM photographers to document the ceremony, hit one over the head with a cane when he tried to reposition himself. “My wedding was very unusual,” Priscilla said last year. “It was the people closest to us, and private, and that’s how we wanted it. We didn’t want a fan club. We didn’t want a circus.”

Page Page 1 of 2
Previous article: Loretta Lynn In ‘Great Spirits’ After Fracturing Hip From Fall At Home
Next Post: Use the Images to Guess the 1970’s Hit Song