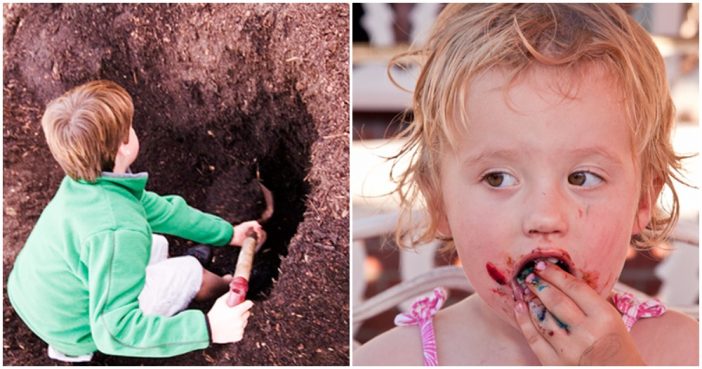 When you’re growing up, going through your formative years, taking in the world with your malleable, sponge-like brain, discipline is important.  A child needs to learn that actions have consequences.  But you know what else is important?  Creativity.  These are some weird punishments that we found from people’s real life experiences.

So, next time you punish your kid, why not kill two birds with one stone and create a punishment that will teach your child some sort of lesson, specifically, a weird punishment! You could hand down a punishment so strange, they’ll never forget it.  Use your judgment.  In reading about some of the strangest punishments people received when they were kids, some examples were borderline grounds for a call to child services.  Without further ado, here are some real punishments people have actually gotten when they were kids.

Two brothers used their mom’s bathtub to play with their toys which happened to have sharp edges that destroyed the tub. It was $500 in damages. One by one, mom sold their toys on ebay until the damage was paid for.

RELATED: Sixteen Things Kids Did In School In The ’80s They Would Never Do Now

Some judges have a special punishment for juvenile shoplifters. They’re sentenced to spend numerous hours standing outside the store they violated while wearing a sign explaining that they’re a shoplifter with instructions to ask them about what they did.

One Redditor remembers that when him and his brother would fight, his father would lock the two of them in their dark, creepy basement for an hour. It was pitch black and so scary that after an hour, the two of them would be hugging each other in fear.

One writer recalls being asked by his second-grade teacher to stand with the rest of class and declare 20 times out loud that he would never, ever use drugs. However, the precocious youngster made the argument that it was impossible for him to know what he would or wouldn’t do 10, or 20 years in the future. The teacher was outraged. She made him go home and write 20 times on a piece of paper that he would never disobey the teacher again. The next day he had to stand up and read it in front of the class, and then pronounce that he would never do drugs, 20 times.

This is definitely a weird punishment for this young person. One ‘now’ grown-up remembers getting in trouble at school. When he came home, his parents had emptied his room. There was nothing in his room except a mattress with a fitted sheet. He’d spend the next month earning back his possessions, from clothes to toys, to books, one day at a time.

EJ recalls when his hyperactive brother refused to do chores, his mother would tell him to go outside and dig a hole to China. EJ would go out digging until it was dark out. The next morning he’d have to fill the hole. It took two days. Any time EJ groaned about chores, mom would threaten to make him dig to China.

One commenter describes a particularly ornery second-grade teacher who had a strange punishment for misbehaving children. If you were caught talking or being a brat, she’d make you get up from your desk and sit in the garbage bin in the front of the room.

Another commenter remembers his teacher’s punishment for kids that stuck gum on their school desks. “She’d make you pry a piece of gum loose from the desk (not our own) and chew it in front of her. I’m pretty sure she’d be arrested now.”