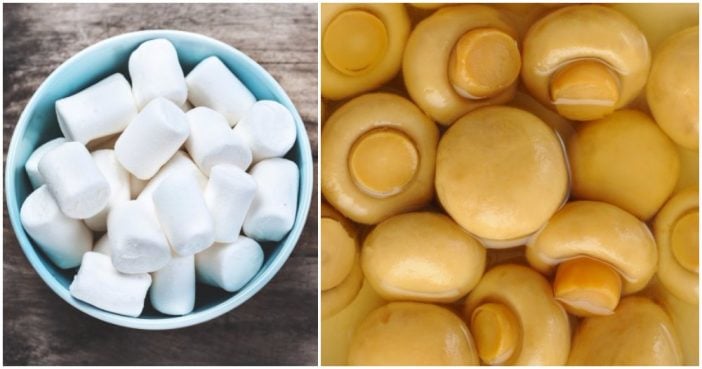 You consume this to avoid all the harmful things in the non-dairy creamers. But appearances are deceptive. The fat free milk is actually made to look whiter than it naturally is. Once the fat is processed from the milk, it turns slightly bluish. Of course, this will scare the consumers. Hence, it is made to go through a whitening process by using a metallic substance called titanium dioxide. What would you rather prefer now?

There really is no redemption for this one. Chewing gums are chewy only because of lanolin, a sheep skin gland secretion! If they decide not to go for it, you would instead have a gum out of synthetic rubber. Yeah, now everyone will stop a moment before popping this mouth fresher in.

The extra redness in your food is actually blood. It’s the blood of dead insects. Don’t worry, it’s kind of safe since people have been taking it in for years now. But if you want to opt out – since it definitely is yuck – you can watch out for words like carmine or carminic acid in the food labeling. They also have a nice sounding word for it – cochineal dye.

This one’s serious as a gradual and regular intake of citrus-flavored soda can lead to potential reproductive or behavioral issues later. Soda is generally not a healthy food option. But citrus soda, more so because they contain something called Brominated Vegetable Oil (BVO.) It maintains the flavor of the soda and is therefore used in about 10% of sodas sold. A lot of countries have actually banned it considering how dangerous it could be if taken disproportionately.

Page 2 of 3
Previous article: 10 Things Only People Who Grew Up In The ’70s Will Relate To
Next Post: Arby’s Parent Company Is Officially Buying Sonic For $2.3 Billion