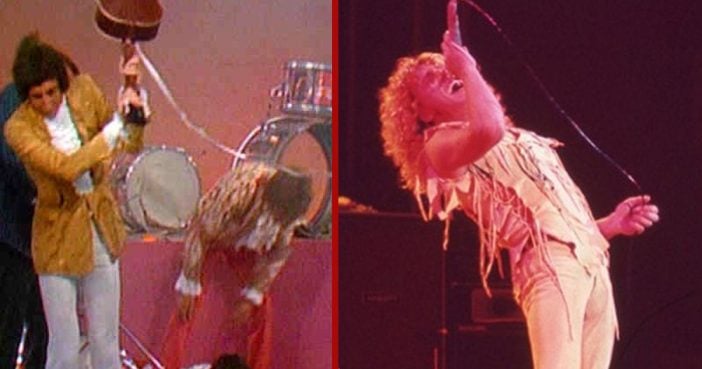 In introducing them at the Monterey Pop Festival three months earlier, Eric Burdon of the Animals had offered high praise for the up-and-coming British rock band the Who, promising the crowd “A group that will destroy you in more ways than one.” A sub standard audio setup that day prevented the Who from unleashing the full sonic assault for which they were already becoming famous, but their high-energy, instrument-destroying antics inspired the next act, Jimi Hendrix, to burn his guitar and announced to the tens of thousands of Festival-goers the arrival of a powerful new force in rock and roll. The rest of America would get its introduction on September 17, 1967, when the Who ended an already explosive, nationally televised performance of “My Generation” with a literal bang that singed Pete Townshend’s hair, left shrapnel in Keith Moon’s arm and momentarily knocked The Smothers Brothers Comedy Hour off the air.

As buttoned-down as its hosts appeared to be, The Smothers Brothers Comedy Hour came as close as any network program could in 1967 to being culturally and politically subversive. Tommy and Dick Smothers fought a running battle with CBS during their show’s three-year run over scripts that subtly tweaked “the Establishment” and guests whose off-air politics were deemed controversial by network censors. Though there was nothing overtly political about the Who, it was more than just lyrics like “Hope I die before I get old” that marked the group as happy warriors in the generational battle being waged in the late 1960s. It was also, among other things, the sheer volume at which they preferred to play and their penchant for leaving every stage they played on looking as if a bomb had just gone off. On this day in 1967, one actually did.

Keith Moon was already in the habit of placing an explosive charge in one his two bass drums to detonate during Pete Townshend’s guitar-smashing at the end of each Who performance. But for their Smothers Brothers appearance, Moon packed several times the normal amount of explosives into his drum kit, and when he set it off, a gigantic explosion rocked the set as a cloud of white smoke engulfed Townshend and singer Roger Daltrey. Though bassist John Entwistle never lost his cool, Daltrey practically flew downstage and when Townshend emerged from the smoke, his hair was almost literally blown to one side of his head. Though the incredible explosion has been rumored to have caused Pete Townshend’s eventual near-deafness, credit for that should probably go instead to the Who’s pioneering use of stacked Marshall amplifiers as a means of achieving maximum volume during their live performances.

History,com: The Who spark an explosion on national television