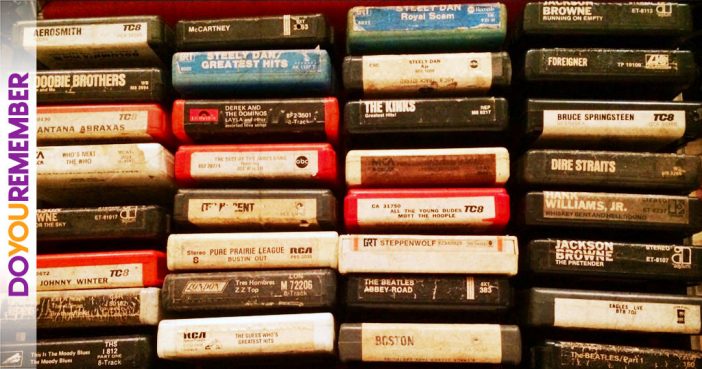 The eight Track tape recording system was in vogue from 1965 to about 1977. While today it has become an icon of obsolescence, it was a great commercial success and paved the way for all sorts of innovations in portable listening.

The eight track tape consisted of an endless loop of standard 1/4-inch magnetic tape, housed in a plastic cartridge.

On the tape were eight parallel soundtracks, corresponding to four stereo programs. For many people old enough to have owned an eight track system, it is a technology associated with the automobile and in-car listening. Ironically, however, it was first developed not by the auto industry, but by a leading aircraft manufacturer: the Learjet Corporation. If you’re among the masses using a smartphone to listen to music on the go, you might scoff at the notion of toting around clunky eight-track tapes of your favorite songs.

But before video killed the radio star or digital transformed the way we store songs, our music came from plastic cartridges you’d pop into a Stereo 8. And if you were lucky enough to have the factory-optional upgrade, you had one mounted on your car’s center console.

At the time, records were great but they lacked the portability of an eight-track cassette. The eight-track tape was just one object, says Buck Burnett, who owns the Dallas-based Eight Track Museum, the world’s first institution of its kind.

You shove it in, you pull it out, and it’s the exact size of your hand. Many claimed the sound faded out between songs or that you could hear a loud click while the song was playing, but, judging by Burnett’s success, the obsession never subsided.

Here’s a quick look at the history of the anomalous eight-track:

1. Richard Kraus initially designed the eight-track technology while working under Bill Lear for his Lear Jet Corporation in 1963. The first Stereo 8 player was named the Lear Jet Stereo 8.

2. Instead of sides, eight-tracks had four different programs.

3. Country music tapes are the most common kind of eight-track.

4. The Beatles’ record label put out about 25 Beatles eight-tracks after the band broke up.

5. The rarest eight-track is a Frank Sinatra album recorded with the Brazilian jazz musician Antnio Carlos Jobim, called Sinatra/Jobim. The reason why it’s so rare? Sinatra ordered all of the copies to be destroyed and only about five survived. It’s worth $5,000.

Related: Total Rewind: The Life Of The Cassette, The Last Cassette Factory

I love the good ol’ phonograph! Nothing is better than a vinyl. Do you agree? Share your comments in the section below.

8-Track tapes were the best, I remember growing my collection to over 100 during the 1970’s. “Brandy” by Looking Glass was one of my favorites, and it had to make our list for best one-hit wonders. Here’s our Top 10 Most Influential 1970’s One-Hit Wonders, enjoy.

Previous article: “A Christmas Story” ‘s Ralphie: Where Is He Now?
Next Post: Thursday’s Do You Remember Today “DYRT” – April 13