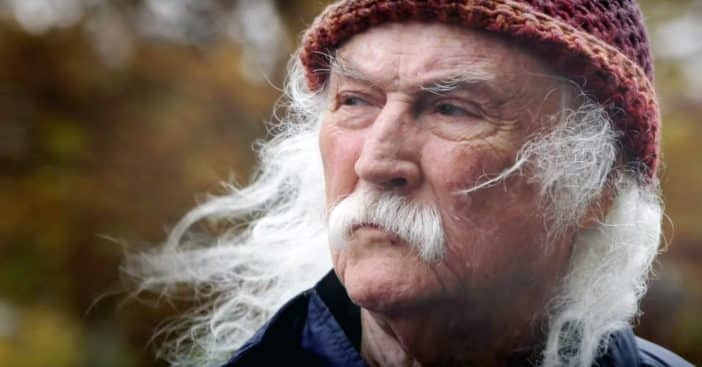 As a member of both the Byrds and Crosby, Stills & Nash, David Crosby was a formative part of music history. Multiple genres – even the seemingly unrelated – have built on one another, like many musical styling tracing their roots back to blues. But Crosby had a very unfavorable about punk rock, which he saw as useless to the artistic medium.

Crosby died on January 18 at the age of 81. For his work with the Byrds and CSN, he has been inducted into the Rock and Roll Hall of Fame twice. Throughout the ’60s, he became a symbol for the counterculture movement of that time.

Pretty much all dumb stuff…no musical value at all and mostly childish lyrics https://t.co/SF6vDL2vlQ

Crosby had a Twitter account with over 237k followers. There, he continued his political activism and gave opinions about the state of music. Back in the summer of 2017, Riot Fest shared a post asking, “Hey @thedavidcrosby, does this mean you don’t want to come to our musical festival this year?” Usually in the autumn, Riot Fest hosts a three-day punk rock music festival in Chicago, Illinois. It features reunions, guest performances, and full album performances.

RELATED: 7 Musicians Who Actually Hate Some Of Their Biggest Hits

That, in turn, was a response to Crosby’s own reply to a post listing different bands, which Crosby deemed “Pretty much all dumb stuff…no musical value at all and mostly childish lyrics.” Seeing this, the page for Riot Fest asked Crosby about the punk rock event, to which Crosby confirmed, “Yes that’s what it means,” he would not be attending Riot Fest any time soon.

Contrary to the counterculture pride

This itself seems contrary to Crosby’s enduring status as a counterculture icon. Indeed, that is what Twitter user @TyranthteHawk believed, noting to Crosby, “I’m surprised. I honestly thought the anti-authority aspect of punk rock would appeal to you.” But Crosby deemed it “Crappy music though.” Even the sounds of Patti Smith, formative for New York’s punk rock movement, were declared “Not my thing” by Nash.

So, where are Crosby’s counterculture roots evident? Louder writer Hannah May Kilroy remembers “Almost Cut My Hair” and “Wooden Ships” with particular nostalgia. Crosby’s music was as defiant as people needed it to be, thanks to those uniquely powerful harmonies he pulled off. Perhaps this display of musical skill is what made Crosby think so strongly about punk rock, if it does not pull off what he did with melodies.

RELATED: Paul McCartney Points To The Two Modern Musicians That He Loves

Click for next Article
Previous article: When Judy Garland Was An Action Hero — We’ve Got the Photos!
Next Post: Meet Country Icon, Reba McEntire’s Son And Five Step-Children