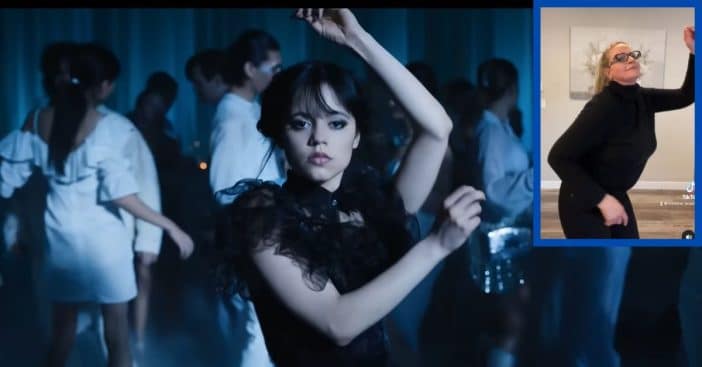 They’re creepy and they’re kooky, mysterious and spooky, and really pretty groovy! The Addams Family is back on TVs thanks to the Netflix series Wednesday, which introduced a dance trend that everyone, including Sister Wives star Christine Brown, is boogying to.

Christine is the ex-wife of Kody Brown who, across four marriages, has 18 children. Their lives are chronicled on TLC’s Sister Wives, which continues to this day. These days, Christine is still on TLC, albeit with her own show, Cooking with Just Christine. Between this program, she’s also a mother to a huge Wednesday fan who inspired her to dance her heart out.

Days ago, Brown took to Instagram to share a TikTok video of her dance moves. “My daughter made me do,” she informed her one million followers in the captions. “Ft. Truely,” she added, referring to the daughter in question. The clip then unfolds to show Brown copying the moves made by the Addams child full of woe. Brown completes the look by wearing a black turtleneck that looks like it could have come out of Wednesday’s own closet.

RELATED: Catherine Zeta-Jones Is Unsure If There Will Be A ‘Wednesday’ Season 2

Adding to the effect of the video is the appearance of Truely, who starts walking into frame behind the apparently oblivious Brown, takes a look at what her mom is doing, then backs out of view, feigning utter disinterest in this display. Brown’s followers loved the video, with some praising, “nailed it!!!” Another said, “Just so happy to see you happy, glowing, thriving, all of the above. It’s great to see!!!!!!!!!!!!!!” A different viewer got a good laugh out of Truely’s cameo, saying, “Truely in the background is like ‘moms at it again’ lol.”

Wednesday released on Netflix on November 23, 2022. It stars Jenna Ortega as the titular Wednesday that Brown so lovingly mimicked, as she pursues her education at Nevermore Academy, which her parents Gomez and Morticia Addams attended. Several episodes were directed by Tim Burton and it additionally stars Gwendoline Christie, Catherine Zeta-Jones, the original Wednesday Christina Ricci, and more.

Wednesday ultimately released with a lot of fanfare and support and debuted at number one on Netflix in 83 countries. Even before going live, it had more pre-release followers than any other program on Netflix except The Witcher. Just within its first week, Wednesday accumulated a combined watch time of 6 billion minutes, and some of that probably came from Christine Brown.

Did you watch the new Wednesday series and try out the iconic dance?