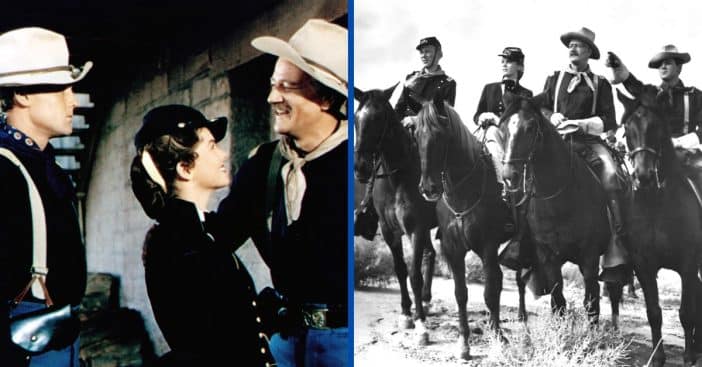 You can’t make this up. Life is stranger than fiction. The truth wouldn’t be believed. Time and again, we are reminded of how full to the brim life is with remarkable true stories, so much so that they shape the fictional ones we tell in some way or another. Sometimes, though, that can put people in a very perilous position. Such was chillingly the case for an on-set conflict while filming She Wore a Yellow Ribbon, a famous John Wayne film with an iconic scene rooted in reality.

Released in 1949, She Wore a Yellow Ribbon is a technicolor western starring Wayne and directed by John Ford. This second entry in the “Cavalry Trilogy” trilogy won the Academy Award for Best Cinematography and follows Wayne as Captain Nathan Brittles. It was shot on-location near the Navajo reservation in Arizona and Utah – sometimes with real thunderstorms putting the crew in real danger. That’s when interpersonal conflicts electrified the filming area in memorable ways.

It was cinematographer Winton C. Hoch who netted the Academy Award. But even though his work with director Ford would spawn a highly-acclaimed movie doesn’t mean they always synergized. In fact, it is reported that the two sparred and butted heads repeatedly throughout the filming process. Then came the day when they had to film a scene involving a cavalry line riding through the desert; overhead, a thunderstorm loomed.

Hoch started packing up to protect the gear and crew from the thunderous threat but reportedly Ford would hear none of it and demanded they continue shooting. From here, though, accounts do differ, with actor Harry Carey Jr. saying that they had wrapped up filming and Ford calmly asked Hoch if they could try for some shots with the storm brewing. In this version, Hoch simply said, “It’s awfully dark, Jack. I’ll shoot it. I just can’t promise anything.”

The danger of the arts

Acting and danger sometimes go hand-in-hand, unfortunately. Burt Ward did all his own stunts in the original Batman series and often ended up in the hospital for it. Actors have representatives and clauses protecting them from undue harm on the job. If the original version of the She Wore a Yellow Ribbon feud is to be believed, Hoch was then compelled to file a letter of complaint against Ford with the American Society of Cinematographers, things were so dangerous.

Sometimes actors improvise in ways that put themselves or their colleagues in emotional or physical danger – or sometimes they avoid it, like Kate Winslet being consulted and warned before the Titanic table flip. Take also Viggo Mortensen breaking his toe and crying out in real anguish in Lord of the Rings: The Two Towers. Where is the line, between capturing an amazing scene and not toeing the line of undue risk?

Click for next Article
Previous article: Rosie O’Donnell Skipped Former ‘View’ Co-Host Barbara Walters’ Tribute
Next Post: Bruce Springsteen Clears The Air On Whether Or Not He Sleeps With Guitar