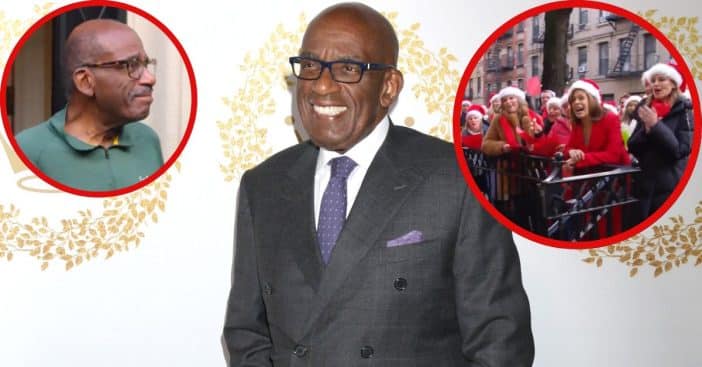 The holiday season has been very busy for Al Roker, but not in the way it’s been for most others. Unfortunately, the meteorologist has been in and out of the hospital with medical emergencies. Fortunately, his colleagues at Today banded together to give Roker some encouragement in a sweet way.

Roker traditionally hosted the Macy’s Thanksgiving Day Parade. However, he was only able to make it home for turkey after being hospitalized due to blood clots in his legs and lungs. He was then hospitalized again from complications. As he and his wife Deborah Roberts take things one day at a time, he received a sweet, musical message from Hoda Kotb, Jenna Bush Hager, Savannah Guthrie, and many more!

The ‘Today’ crew surprise Al Roker with a sweet song

Roker has still been away from Today, but he and Roberts have been keeping the cast and fans updated, usually through social media but recently Roker also made a virtual appearance. There, he gave them a rundown on his four-week hospitalization and subsequent recovery at home. When all was said and done, though, an hour passed before Roker was in for another surprise – of a much more pleasant sort.

RELATED: Al Roker Rushed Back To Hospital Less Than A Day After He Was Discharged

Roker ended up signing off just to open his front door and see his Today colleagues standing right there like Christmas carolers. Guthrie, Hager, Kotb, along with Sheinelle Jones, Craig Melvin, and fellow meteorologist Dylan Dreyer took that role seriously and sang to him. There was the classic “Jingle Bells” and a personalized “I’ll Be Home for Christmas” turned into “Al Be Home for Christmas.”

Happy to be here for the holidays

It’s the season of giving and the Today team was very happy to give Roker this surprise. “It was one of the most heartwarming moments, for all of us,” reflected Guthrie on Thursday, a day after the musical reunion that also included the security team and crew staffers, all adorned in Santa hats. “Everybody was in tears. And it was just beautiful and so wonderful to see him.”

Roker’s own tearful reaction spoke for itself, but he insisted on voicing his gratitude, waiting for the songs to end before saying, “I just want to thank you all. It’s been a long, hard slog and I’ve missed you all very much. Seeing all these faces, just means the world to me. And you are all family. … I just thank you all so much. I really appreciate it.” Of course, he also joked he was surprised they “did that without a prompter.” Whatever comes next, it’s clear Roker won’t be going through it alone by any means!