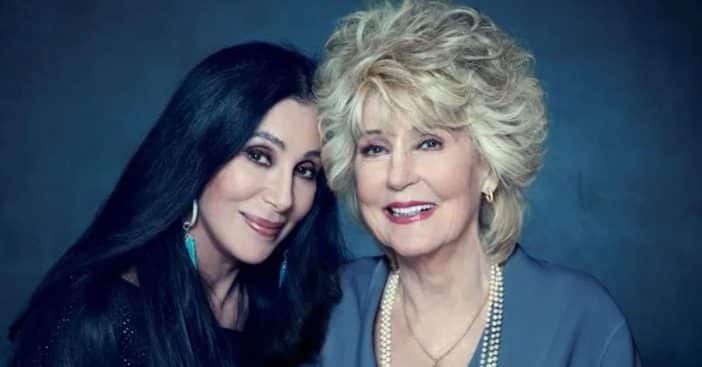 It has been reported that Cher’s mother, Georgia Holt, has died at the age of 96. 76-year-old Cher tweeted out in the early morning hours that, “Mom is gone,” with a sad face emoji. This sad news comes just three months after it was revealed that the 96-year-old had been hospitalized for pneumonia.

“Sorry I’ve Been Mia. Mom’s Been Sick Off & On. She Just Got Out Of Hosp. She Had Pneumonia,” Cher had wrote at the time. “She’s Getting Better.”

Cher had previously opened up about her mother’s health and how she had her mom get tested for COVID “all the time” especially when the pandemic was at its worst. “We have a little bubble that we’ve had all this time,” she said. “We wear masks, and there’s not very many of us. It’s my sister, my brother-in-law, my mom, my assistant. And we stay far apart from each other.”

RELATED: Cher Seems To Be In Heaven With 36-Year-Old Boyfriend

She added, “I have to be careful too because I have asthma. … I have different health problems.”

Holt was a known actress and singer, and was known for landing roles in film and on television, including 1950’s Watch the Birdie and I Love Lucy. She also had appearances on The Mike Douglas Show and The Merv Griffin Show in 1979 and 1980 before releasing her debut album Honky Tonk Woman in 2013, originally recorded in the ’80s.

It was back in 2013 that there was a documentary released called Dear Mom, Love Cher, and during that same time, Cher spoke about the lessons she’s learned from her mother throughout her life. “She never gave me and my sister advice because, truthfully, she knew we’d never take it,” Cher said of her mother. “Instead, we learned about life by listening to her talk about the things she did wrong and the things she did right.”

She remembers when she was younger that she and her mom would butt heads quiet a lot. “I did a couple of things like running away when I was 11,” Cher told PEOPLE at the time. “I hopped a train with my friends. I was just very adventurous – but never disrespectful. She wouldn’t have put up with that.”

Click for next Article
Previous article: Beverly D’Angelo Says Her Husband Divorced Her So She Could Date Al Pacino
Next Post: Fran Drescher Shares How She Stays Healthy As She Ages