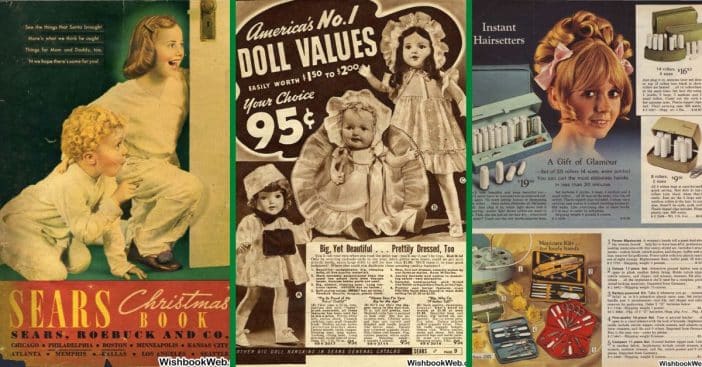 Santa Claus is coming to town. He’s making a list and checking it twice and so were kids and shoppers alike decades ago, when stores sent out their Christmas catalogs for some holiday wishing. Each year, stores such as Sears, Kmart, and J.C. Penny sent out a catalog sometimes called a Wish Book, filled with every item people of all ages could want. Thumbing through these became as much a Christmas tradition as leaving cookies out for Santa.

So, with another Christmas upon us, let’s turn back the pages of life and read through these beloved catalogs again. Just how did this treasured tradition get its start? What makes it so much more special than the digital version we do these days in a world of Amazon shopping and Cyber Mondays? Time to gather around the Christmas catalogs and find the answers – and nostalgic happiness – there.

Catalog shopping is something of an American tradition

In the broad, historical sense, the very first example of catalog publishing dates back to Venice in the 1400s. The idea of catalogs made it to the U.S. before it was a collection of states and remained under British rule; it’s generally accepted that Benjamin Franklin was the nation’s very first cataloguer and became a pioneer of catalog merchants. It’s only natural this idea became closely associated with Christmas and, sure enough, Sears, Roebuck & Co. mailed out holiday catalogs in 1933. By 1968 it was dubbed the Christmas Wish Book, or even shorter, the Sears Christmas Book.

RELATED: What Are The 10 Best-Selling Christmas Albums Of All Time?

Looking through a timeline of Christmas catalogs archived by Wishbook Web shows that Sears definitely has a strong presence compared to other vendors. That’s because Sears had already been a part of the Christmas tradition even before its catalog kicked off in the ’30s and ’40s.

The 1896 general catalog sold wax candles for Christmas trees – before tinsel helped spread the light instead of an open flame in dry branches. Two years later it added cards. Another two years later, ornaments were offered as well. By 1910, shoppers could also see stockings and artificial trees in the book’s pages as well. Two years later came plug-in lights.

In this way, these Christmas catalogs acted as everyone’s wish list for the holidays. It was easy for this industry to flourish since there were, indeed, so many players pushing their Christmas catalog as the one to consult. Another titan in this market was J.C. Penney. It entered the fray later in the game after buying General Merchandise Company and its catalog business in 1962 but it managed to stand out since the physical store came before the magazine.

History in the making

Thumbing through Christmas catalogs was like glimpsing through a window into the history and culture of that time. Clothing trends like the desirable use of petticoats to fluff up skirts. The mounting popularity of Western shows and films, exacerbated by toys and costumes kids couldn’t wait to wrangle for themselves. Other details hid themselves in plane sight like the popularity of watches, which once had been reserved for the upper of upper classes – now available for anyone to get as a treat.

Part of the name Wish Book comes from the nature of shopping throughout the 1900s. In the years so close to the Great Depression and World War II, families had to understand that some items probably couldn’t be obtained – but they could be wished for. So came the book of wishes, as it was also called.

Some of these Christmas catalogs could be real doorstoppers or paperweights. Montgomery Ward’s catalogs were 240 pages. Its competition, reported to be the Sears Wish Book, went from 85 pages in the ’30s to over 800 pages, weighing in at over five pounds!

The twilight of a shopper’s delight

Like many beloved traditions, from the Sunday dinner to buying Easter formalwear, shopping from Christmas catalogs dwindled with the advent of the internet. As more and more companies built websites for themselves, those became the new base from which shoppers could purchase goods; and so it also became the place from which to promote and sell. The digital medium allowed for a lot of conveniences too; shoppers could see a product at different angles and better lighting, read reviews from other buyers, and if applicable, play audio related to whatever they had their eye on.

On top of that, the cost to assemble materials, compose, print, and distribute magazines has caused some vendors like Bloomingdale’s to outright cease all catalog printings. Now, there are merchants who have only ever been online and never even started with a physical catalog.

Do you remember flipping through these catalogs?

RELATED: Mariah Carey’s ‘Messed Up Childhood’ Led Her To Her Love For Christmas