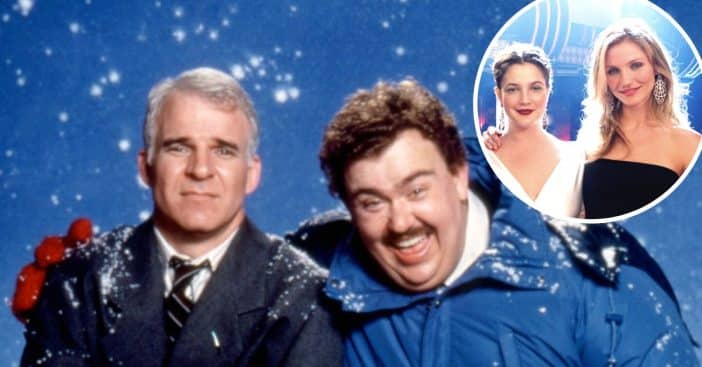 Drew Barrymore recently caught up with her friend Adam Sandler and admitted the one film that she would really like to remake. She shared that she has been talking about doing a Planes, Trains, and Automobiles remake and really wants her friend Cameron Diaz to star in it alongside her. While Cameron retired in 2014, she recently returned for a Netflix film called Back in Action.

Drew explained, “Her and I did discuss remaking ‘Planes, Trains, and Automobiles,’ and then I was like, ‘Well you know Adam and I talk about that.’ Well, I also want to play John Candy.” Adam replied, “You could do a good Candy. You know who could do Candy the best? [Chris] Farley. He would walk around the office and say lines from ‘Planes, Trains, and Automobiles.’”

If Adam or Cameron reunited with Drew, it would be very special. Drew starred alongside Adam in several films over the years and worked with Cameron in a few too. Planes, Trains, and Automobiles first came out in 1987 and featured two businessmen trying to get home for Thanksgiving. The original film stars Steve Martin and the late John Candy.

RELATED: Steve Martin Reflects On The 19 F-Words In ‘Planes, Trains and Automobiles’ Scene

Cameron has not shared if she would be interested in the remake or not, but she did express nervousness about returning to Hollywood after a few years of retirement. She said she feels excited but very anxious at the same time.

She added about her decision to retire, “Fame is very infantilizing. It’s very much about keeping somebody coddled in a state of like, we see a little child and think, ‘It’s so cute, I want it to always be cute, and if I keep it cute by always treating it cute, maybe it’ll stay cute forever.’ And that’s how people treat you.” Would you like to see a remake of Planes, Trains, and Automobiles?

RELATED: John Candy Treated The Extras Of ‘Planes, Trains & Automobiles’ To A Thousand Dollars Worth Of Room Service

Click for next Article
Previous article: Christina Hendricks Shows Off Her Curves In Vintage Dress Photo
Next Post: Celine Dion Gives Updates On Ability To Sing After Announcing Health Diagnosis