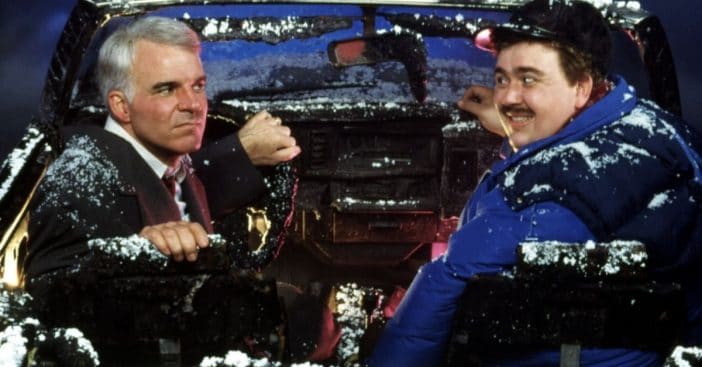 There is one specific scene in the hit film Planes, Trains & Automobiles that still makes actor Steve Martin emotional to this day. The 1987 film may be considered some of Martin and the late John Candy’s best work, and for good reason. The film has gone on to become a Thanksgiving movie staple each year, and it’s no secret why between its indisputable comedy and heartwrenching yet heartwarming moments.

It was in the book Crazy Guys: How the Comedy Mavericks of the ’80s Changed Hollywood Forever by Nick de Semlyen in which the friendship between Martin and Candy was described at length. The two had a great time during the film because they had already had a great friendship, but that also made the emotional scenes that much harder to get through.

This one unscripted scene in ‘Planes, Trains & Automobiles’ still gets to Steve Martin

Martin was often impressed with Candy’s ability to ad-lib so well, and so he’d usually improv a bit with his lines on set. In an unscripted moment, during the scene where Candy’s Del Griffith explains to Martin’s Neal Page that he is homeless and his wife has been dead for years, he ad-libs the line, “But this time I couldn’t let go.” Semlyen writes, “Martin would still shed a tear remembering the heartfelt confession” many years after Candy’s unfortunate death.

As aforementioned, the film has become even more beloved throughout the years, a box office hit upon its release in the ’80s, bringing in $49 million against a $15 million production budget. The film is currently streaming exclusively on Paramount+ for those who wish to take a stroll down memory lane and watch it again. From watching the final cut of the movie, it doesn’t appear this unscripted moment made it, but that doesn’t stop it from being one of the most soul-crushing scenes in the whole film. Take a look and watch it below.

Click for next Article
Previous article: Bill Murray Finally Addresses Allegations Of His Behaviors On Set
Next Post: A Young Fan Mistook John Wayne For Steve McQueen—This Was His Response