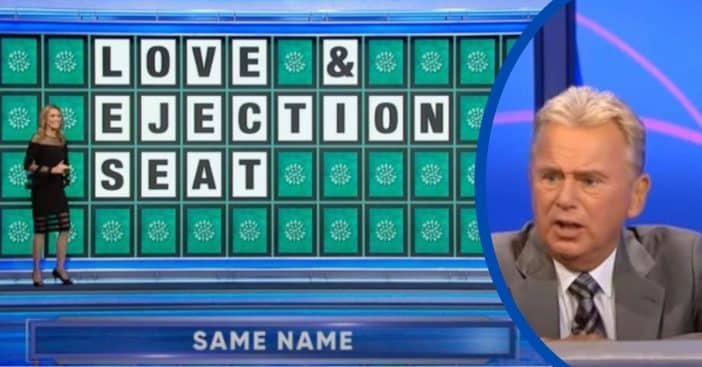 Since its 1975 premiere, Wheel of Fortune has had dozens upon dozens of clues and contestants, leading to some interesting scenes of participants trying to solve the latest puzzle. Recently, a contestant had current host Pat Sajak so indignant, he had to sit on the ground in dismay.

Sajak has been hosting the series since ’81, just two years shy of the most popular and enduring version of the show premiered. In other words, whatever unbelievable scenarios the show has played host to, Sajak has witnessed the majority of them. But it was this contestant, who had a very particular way of solving a puzzle, effectively knocked Sajak off his feet. Here’s what happened.

Meet Sonia, a recent Wheel of Fortune participant confronted with the category “Same Name.” The words to the solution were comprised of four, three, eight, and four letters. The final answer was “Love and ejection seat.” Sonia went through the vowels – every single one. Once those were run out, the game show alerted her there were no more vowels available. But Sonia meticulously sought each individual blank space.

RELATED: Pat Sajak Responds To ‘Wheel Of Fortune’ Round That Took Social Media By Storm

Sajak quickly tuned into this approach to solving the puzzle – especially when the word “ejection” was just missing two letters: the C and the J each. “They’re all gone,” Sajak informed her, asking, “Spin or solve?” The end seemed in sight.

Sonia had a method and she was sticking to it. “I would like to buy a C,” she answered. Her dedication to this method had Sajak beside himself, sending him behind the titular wheel to process that, no, this puzzle was not going to just be solved – Sonia had one more wheel spin to do and she would do it. From off-camera, he could be heard saying, “Yep, it doesn’t matter how you say it the important thing is you said C.”

Then, of course, Sonia asked for the J to finish the puzzle. “Yes,” a defeated Sajak said from the ground. “Now would you do us a favor and read what’s up there please?” Finally, Sonia said, “Love and ejection seat.” Sajak was exhausted by then and used the wheel to lower himself to the ground, moaning, “I have to sit down for a minute.” Sonia offered a quiet apology. Sajak had her repay him by doing some of his duties like moving two wedges. Wheel of Fortune fans online absolutely ate up the antics from Sonia and Sajak, with one noting, “I think Pat Sajak just had a panic attack or a near heart attack.”

What is the funniest memory you have from watching Wheel of Fortune?

Click for next Article
Previous article: Dolly Parton And Kelly Clarkson Sing High-Energy Version Of “9 To 5”
Next Post: The Trailer For One Of Ray Liotta’s Final Film Appearances Is Here