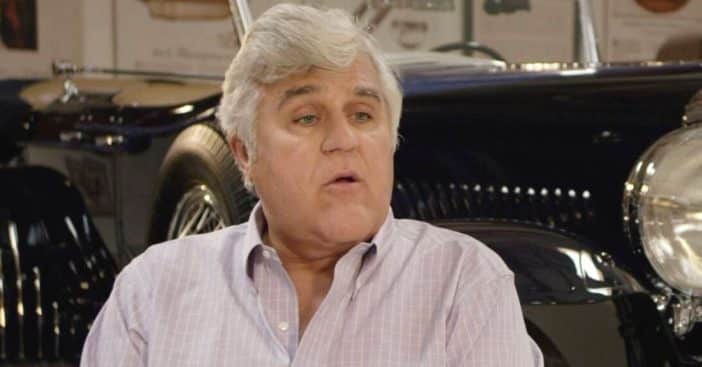 Former Tonight Show host Jay Leno recently had to cancel an appearance in Las Vegas due to a “very serious medical emergency.” Of course, fans were very worried about Jay and now he is finally speaking out about the incident that happened over the weekend.

Jay revealed that he is suffering from “serious burns” from a gasoline fire. He said that he is doing okay now but needs a few weeks to recover and get back on his feet. Jay was scheduled to perform at a financial summit in Las Vegas but had to cancel at the last minute. His family was unable to give details at first.

Reportedly, Jay suffers from burns all over his body including on his face from the gasoline fire. Some reports speculated that the fire started at his Burbank California-based garage where Jay keeps many of his classic cars.

RELATED: Jay Leno Was Almost Bitten By Alligator With Steve Irwin As Guest

However, the Los Angeles Fire Department came out and said that was false as they did not receive any reports matching that description. Jay did not share what exactly happened or what started a gasoline fire that led to burns but fans are relieved that he seems to be okay.

Others speculate that the fire happened sometime Sunday afternoon. Jay Leno’s Garage Twitter page shared a post at 12:15 pm on Sunday. Later that evening, news broke that he suffered from a “serious medical emergency.” Wishing Jay a quick and easy recovery!