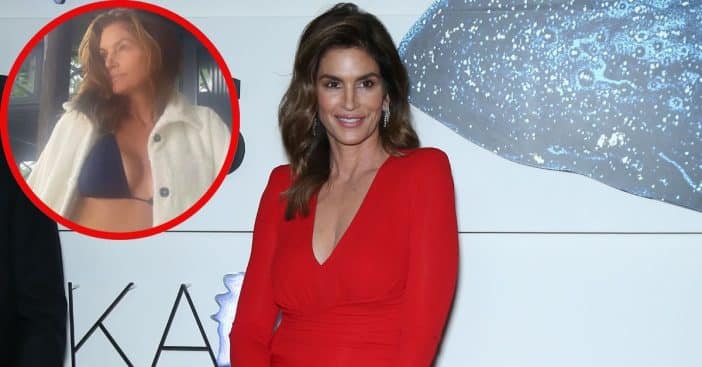 Since the 1980s, Cindy Crawford has been a familiar face along the runway and on magazine covers, and today at 56, she’s just as photogenic as ever. Crawford proved as much recently with a photo not set down the catwalk garbed in the latest trendy layers, but rather right in bed, wearing some sleek black lingerie.

The ’80s and ’90s saw Crawford reign supreme as one of the most popular supermodels of that time, a career she kicked off with a project that put her alongside other huge names like Linda Evangelista and Naomi Campbell. Modeling and advertisement campaigns are big parts of her resume and her latest bedroom photo on Instagram serves as a photoshoot for Haute Living. Check it out!

Last week, Crawford took to Instagram to share her latest project. She captioned the post, “@hauteliving November Issue by @brianbowensmith,” before tagging the other team members involved in the photo, including @dimitrishair @lisastoreymakeup and @bradgoreski. With their efforts combined, they created a sultry image of Crawford wearing lacy black lingerie hidden partially by waves of sheer black fabric draped over her limbs.

RELATED: Cindy Crawford’s Mini-Me Daughter Is All Grown Up And Working As A Professional Model

It is accompanied by another set of photos, these set outside. The first shows Crawford stood atop a stone bench with her arms outstretched. She’s still in black, the throughline of all these pictures, but this time it is part of her dress, held in place with an elegant chain, contrasted sharply against white fabric. Finally, she is seen wearing a black gown with a low front held further open by Crawford. Swipe through to see each stunning photo!

Catch up with Crawford

It’s easy to look at these pictures and feel Crawford is outright defying the aging process – but one person strongly disagrees with that sentiment: Crawford herself. “I know all the ways that I’ve aged. “My face has gotten much thinner; my mouth isn’t as full. Being told I’m ageless isn’t right,” she counters, adding, “especially because getting older is hard enough, never mind that we live in a youth-obsessed culture.” With this in mind, Crawford has adjusted her beauty campaign career to promoting some important messages, both for those of all generations and for herself.

This means her beauty line, Meaningful Beauty, is about creating an empowering campaign for others and promoting “things that I have to remind myself about, too.” For example, “I’m not 25, so why should I be trying to look 25? Why do I want someone to mistake me for a 25-year-old? I’ve had children. I have all this life experience.” So, she aims to celebrate what is, not what was.

Click for next Article
Previous article: Director Of ‘Airplane!’ Says Comedy Is In Trouble In Cancel Culture
Next Post: Mark Wahlberg Gives Reasons For Moving Family From Southern California To Nevada