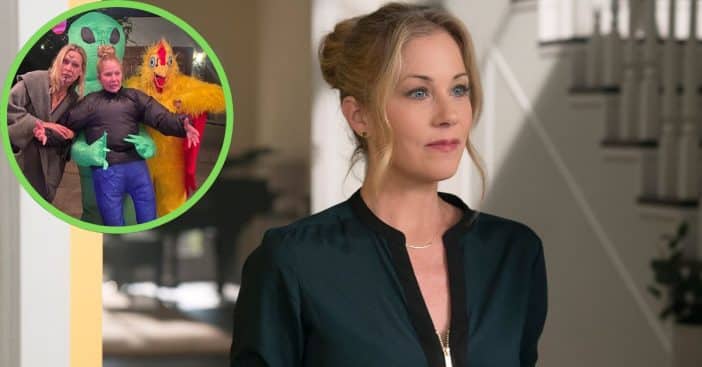 Christina Applegate has been busy with professional and personal tasks. She is working determinedly on her hit Netflix series Dead to Me, all while contending with her MS diagnosis. In between it all, Applegate got into the holiday festivities, sharing a “sexy” Halloween photo with an otherworldly twist.

Applegate announced her MS diagnosis in the summer of 2021. Since then, she withdrew from the spotlight – further, compared to her relatively slower schedule to focus on family. But Applegate has returned in earnest, albeit while still learning to live with MS. This post marks a festive change in routine for the Married… with Children star.

You don’t know sexy until you are sexy. Happy Halloween! pic.twitter.com/AS8qGVgzUQ

On November 1, Applegate shared a late Halloween photo on Twitter. The picture features a chicken, a witch, Applegate with an intense expression, and a towering green alien – the usual company. “You don’t know sexy until you are sexy,” Applegate captioned the post for her 1.5 million followers, adding, “Happy Halloween!”

RELATED: Christina Applegate Talks About Her First Signs Of MS

When a user posed some questions regarding just what the Halloween costume is supposed to be and why Applegate appears so short – she explained, “I was an alien abducting someone. And I am short because of DNA. HAHA.” Based on a video shared in the comments, the alien and the “legs” are all part of the same costume, where the person playing dress up is actually the alien with fake legs swinging around for the person they are carrying off to their home planet.

The new normal with MS

Since her diagnosis, Applegate has been undergoing treatment and shared updates on her health. All the while, she also insisted on continuing her work for Dead to Me. “This is the first time anyone’s going to see me the way I am,” Applegate revealed of the final season, set to drop on November 17. “I put on 40 pounds; I can’t walk without a cane. I want people to know that I am very aware of all of that.” Fortunately, her family and other public figures with MS are aware and have shared an outpouring of support, including her The Sweetest Thing co-star Selma Blair.

That’s left Applegate to focus on her health and finishing the project that earned her a nomination for Outstanding Lead Actress in a Comedy Series. “If people hate it, if people love it, if all they can concentrate on is, ‘Ooh, look at the cripple,’ that’s not up to me,” she continued. “I’m sure that people are going to be, like, ‘I can’t get past it.’ Fine, don’t get past it, then. But hopefully, people can get past it and just enjoy the ride and say goodbye to these two girls.”

Click for next Article
Previous article: Sharon Stone Tells Female Fans To Always ‘Check Again’ Following Misdiagnosis
Next Post: The Trailer For ‘A Christmas Story Christmas’ Is Here & Ralphie Is All Grown Up