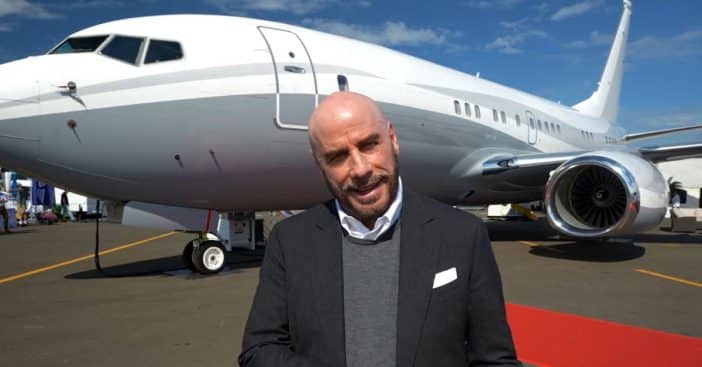 In addition to being an actor, John Travolta is also a licensed pilot and aviation enthusiast — which makes him the perfect person to give us a tour of Boeing’s 737 Business Jet. He recently did an exclusive video showcase of the aircraft at the 2022 NBAA Business Aviation Convention and Exhibition that was held in Florida.

Boeing Airplanes posted the video on their Twitter account with the caption: “For someone who has been in the flight deck as long as he has been on the silver screen, #JohnTravolta knows beautiful planes. Let Mr. Travolta, a licensed 707, 737 and 747 pilot, take you on an exclusive tour of our #BoeingBusinessJet at #NBAA2022.”

Inside The Boeing Business Jet

For someone who has been in the flight deck as long as he has been on the silver screen, #JohnTravolta knows beautiful planes.

The BBJ was built in 2010 and registered as the YG128. The magnificent jet is more luxurious and spacious compared to the usual private jets. Travolta described the interior as “a large apartment,” and he’s not wrong, because it can accommodate up to 19 passengers. The exterior is not drab either, as it features sleek designs and a solid build, thanks to Jet Tech.

First, we see the Pulp Fiction actor go up the air stairs and into a large space containing leather recliners, sofas, and a large television set. The jet also features a dining area with a few tables that can double as a conference or meeting room. The owner’s suite, which is the selling point of the aircraft, features a large queen-size bed and TV, plus a walk-in shower built to a high-class taste.

The BBJ is definitely not a cheap one, and rightly so, as the quality says it all. It is estimated to cost nine figures. However, the Boeing Business Jet is not up for lease until 2024, and Travolta might just be adding this hot new release to his jet fleet, including a Bombardier Challenger 601, a Boeing 727, an Eclipse 500, a Dassault Falcon 900 and three Gulfstream jets.

The jet is equipped with two CFM56-7B27 engines and two Split Scimitar Winglets to help reduce drag and save fuel. It is built with high technology and intentionality designed to reduce fuel consumption and increase performance. Travolta mentioned that the plane could fly up to 13 hours uninterrupted, and — given his experience in the air — we trust his judgment.