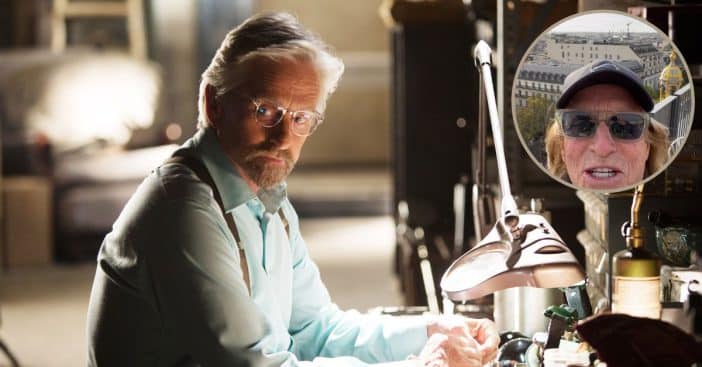 Michael Douglas has recently debuted a crazy new hair transformation and, of course, fans are weighing in with their thoughts. On October 28th, he took to Instagram to post a video of himself with some long red locks, captioning the post, “Hey guys! Happy #TGIF! Have a good one! Lots of love! MD.”

He appeared to be on a balcony in Paris at the time. So what do fans think of the new look? It’s kind of mixed.

What do you think of Michael Douglas’ wild new hair?

One fan wrote, “Sorry Michael, the hair makes you look older not to mention the wrinkles. Go dye your hair back to grey and get a haircut.” Ouch. Another theorized that the new hair may be for a new, upcoming project. “Probably for a character he is playing in a movie,” they said. One fan was just happy that Douglas was sharing his life with them, not really concerned about the hair, saying, “Is this not the best celebrity insta account? I just love this man and all the love we get here.”

RELATED: Catherine Zeta-Jones And Michael Douglas Dance With Their Kids And Its Adorable

According to his IMDb, Douglas is currently filming a new project for Apple that is centered around Benjamin Franklin. The project will explore a certain part of Franklin’s career, as the description reads: “At age 70, outmaneuvered British spies and French informers all while engineering the Franco-American alliance of 1778.” Also joining Douglas on the project include Ludivine Sagnier, Eddie Marsan, Daniel Mays, and Noah Jupe.

Aside from continuing his acting career, Douglas said back in a 2021 interview that he looks forward to the finer things in life instead of stressing. “With maturation, you don’t necessarily feel a whole lot different from what you felt when you were younger,” Douglas said at the time. “I’m just looking for the joy of a good moment.”

In the same interview, he also discussed what got him inspired to start acting. He says it all started at the University of California at Santa Barbara. “I ended up getting a motorcycle and riding in my velour Renaissance shirts up to San Francisco for rock concerts. Then I got called into the vice chancellor’s office: “You’ve got to declare a major, man.” So I thought, OK … theater.” However, his late dad Kirk Douglas wasn’t all that thrilled about his son’s acting abilities… at first.

“I must say that my father, Kirk, came to just about every show I did, as busy as he was. And he told me right in the beginning, ‘Son, you were awful. You just were awful.’” There are some other issues that came colliding with his acting abilities. “I had terrible stage fright,” he admits. “I don’t know why I did not give it up, but I just ground away for about a year and started to get better.”

Click for next Article
Previous article: Patrick Duffy And Linda Purl Start Their Own Business Stemming From Pandemic Pastime
Next Post: John Travolta Leads Us On An Exclusive Tour Of The Boeing’s 737 Business Jet