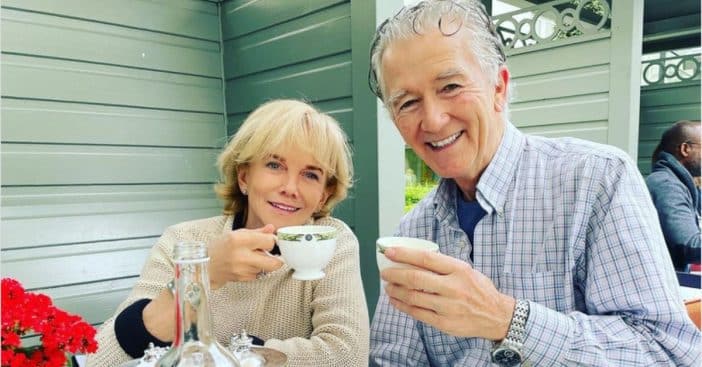 Though two titans of TV, their work did not see Patrick Duffy and Linda Purl cross paths as stars together. Duffy reigned as the redemption of the Ewing family in Dallas while Purl won the heart of the rebellious Fonzie in Happy Days. Today, though, they’ve won each other’s hearts and still keep the romance fresh. Just how did these two meet, and what does Duffy have to say about making every day like falling in love for the first time?

Duffy had been married before; he originally tied the knot with Carlyn Rosser in 1974. She was a professional ballerina ten years his senior known for practicing Buddhism. It was enough even for Duffy to convert. The two had two sons together. The two stayed together through the decades and into the turn of the century. Sadly, Rosser died in 2017. For years, Duffy’s romantic life seemed to be on pause – until affection blossomed during a time when the world felt at its most lonely.

Patrick Duffy and Linda Purl connected during the pandemic

Saying Duffy and Purl connected in 2020, hearing that year, carries weight to it as a year that threatened to disconnect everyone. But it was almost because of that isolated year these two bonded, as they ended up talking extensively in a group chat, a favorite among the safe ways to communicate from a distance. For this reason, Purl called their budding courtship “a very Victorian process,” as they first talked platonically before seeing one another, like nobles might reach out through mutual parties, attend chaperoned meetings, and the like. “We explored all our history, our past, our loves,” explained Duffy. “We listened to music together and covered all that ground you normally cover over months of dating.”

“I loaded up my car and drove 20 hours and ended up on her doorstep just to see if it was real,” Duffy admitted. “We haven’t been apart since.” It helped that the two had already been friends. They lost touch over time but then talking in that group chat helped them feel like no time had passed – and then some. A group chat became one-on-one messaging and Zoom calls. They’ve also been smart, Duffy says, and have stuck exclusively to habits that nurture their relationship, not hurt it. Here’s what that entails.

The secrets to keeping their love strong

As noted, this is not Duffy’s first relationship, nor is it Purl’s. She had actually been married to Desi Arnaz Jr., son of Lucille Ball and Desi Arnaz. The two split in ‘80 and eight years later, Purl married William Broyles Jr. That too ended in divorce, as did her relationship with Alexander Cary, a screenwriter and future Viscount of Falkland. The same happened with James Vinson Adams. Now, however, Duffy says everything has been decidedly positive. “You get to a point where you think, ‘It’s all about her. How do I get her to smile?’” Duffy shared. With experience comes wisdom, after all. “We’ve eliminated all the trials and errors that happen in [younger] relationships. It’s all positive and lovely.”

It helps that they could bond “no outside influences to encumber you.” But in person, Purl displays mastery in the kitchen. It’s been like that since the start, with Duffy recalling, “When we got together, I can actually remember I arrived late in the afternoon, and we had dinner, and we cooked dinner in the kitchen. And it was a dance that we had never done together, but the choreography was known to both of us.” Everything from the way they cook, clean, and operate in their professional lives make them “very compatible,” according to Duffy.