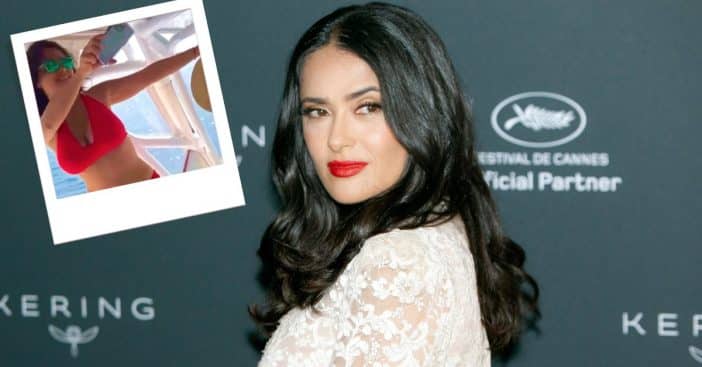 When celebrity magazines compile the list of most beautiful pop culture icons, that list usually includes Salma Hayek and on her 56th birthday, that hasn’t changed. Born on September 2, 1966, Hayek began her career back in Mexico in 1989 before breaking out onto the Hollywood stage in ’95.

Since then, she has primarily accumulated acting roles in television shows and films, but she has done some professional modeling. Even off of the runway, her 21 million Instagram followers got to see some fun, fashionable photos, especially when Hayek shared a celebratory birthday post of her dancing in a flattering swimsuit.

On September 2, Hayek shared a video to Instagram. “Happy 56th birthday to me,” she captioned the post, complete with a Spanish translation. She was seen dancing around on a boat that was speeding through the ocean. In the video, she records some of what she’s seeing and waves around her summery straw hat, all the while wearing a vibrant red two-piece bathing suit. Her eyes are protected by a large pair of green sunglasses. All around, it looks like a fun day in the sun!

In the captions, Hayek also credits the music as being Stevie Wonder’s rendition of “Happy Birthday,” which itself was composed with the goal of creating a national holiday that eventually became Martin Luther King Jr. Day. That version released in 1981, 15 years after she was born. Hayek herself has done more acting than singing, but her filmography has her in a musical role more than a few times. For instance, in Dogma, she plays the Muse known as Serendipity that helped inspire great musicians throughout history. In the movie 54, she is an aspiring singer. In Across the Universe, she sings a Beatles cover of “Happiness Is A Warm Gun.” That’s not even counting the multiple music videos she has directed.

Salma Hayek has a history of fabulous birthdays

Over the years, Hayek has proven she knows how to celebrate her birthday in style. Since it falls in early September, Hayek still has some of that summer sun for the occasion. In 2021, she shared a selfie with her standing on a stretch of beach, with sand giving way to overgrown shrubbery under a clear blue sky. Just as vibrant was Hayek’s own blue one-piece bathing suit. In a similar vein, she captioned that post, “Happy 55th birthday to me looking forward to new adventures #grateful .”

Indeed, there is a lot to be grateful for. Her portrayal of Frida Kahlo in 2002’s Frida saw Hayek make history as the first Mexican actress to be nominated for the Academy Award for Best Actress. Over the years, Hayek has also successfully expanded her arsenal of skills to include producing. Through it all, she is a fierce advocate for important causes, championing the Violence Against Women Act, and fighting for women’s rights in Afghanistan. This is certainly a birthday worth celebrating.

RELATED: 16 Celebrities Who Look Decades Younger Than They Actually Are

Click for next Article
Previous article: Shania Twain Stuns In Plunging Dress With High Leg Slit For ACM Honors
Next Post: Ozzy And Sharon To Make Reality TV Comeback With ‘Home To Roost’