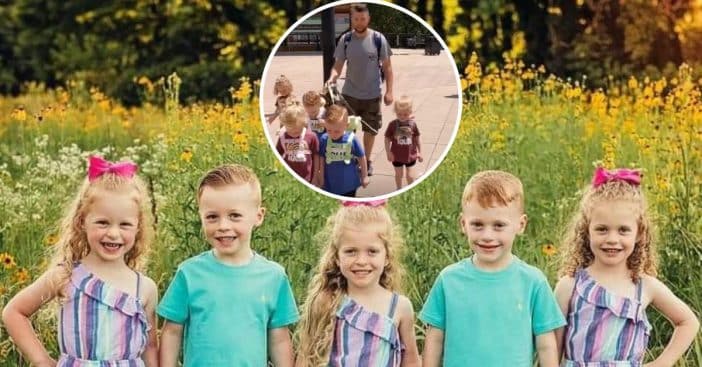 The joy of having children is great but raising them requires much effort. Parenting styles differ from one person to another. Truth be told, there is no set manual on how kids should be brought up. How each family handles their wards will be particular to their needs. However, it is not uncommon for moms and dads to be criticized for their methods.

Recently, a father of five, Jordan Driskell, triggered an unending discussion after posting on Instagram a video of himself holding his five-year-old quintuplets during a walk with a caption that reads, “Come walk a mile in my shoes, You ain’t nothing but a dog, playa.”

Jordan’s reason for putting his children on a leash

In an interview with TODAY, Jordan revealed the security challenges he foresaw that made him opt-in for having a leash for his children. “Kids are so curious—they want to run off and explore,” he revealed.

Also, he explained how the new method effectively controlled the five children whenever they were outside. “For our own peace of mind and sanity, we use a leash. It also allows us to leave the house and do fun stuff as a family without being stressed.”

The video has been met with mixed reactions, and everyone has been doling out their parenting takes in the comment section under the post.

Sadly, the unsolicited advice came rolling in. A user wrote, “They are humans not dogs.” Another person added, “That’s messed up. If you can’t handle that many children don’t get them in the first place.”

To douse the tension, a person who understands Jordan’s plight came to his rescue. “Listen, until you have five kids you’re trying to wrangle, keep safe, and take out together at the same time in public, it’s not on you to judge. Even if you do have five five-year-olds, these aren’t them, and parenting kids requires knowing them, their specific needs, and what works for your individual family. It’s not anyone’s business to decide what works for another family. This man is out with five kids. FIVE. All he needs is a little applause as he walks by—that’s it,” the user explained.

Click for next Article
Previous article: Priscilla Presley Says Elvis Didn’t Want To Do Any More Beach Movies
Next Post: Clint Eastwood’s Son Scott Eastwood Has Made A Name For Himself In Hollywood, Just Like His Dad