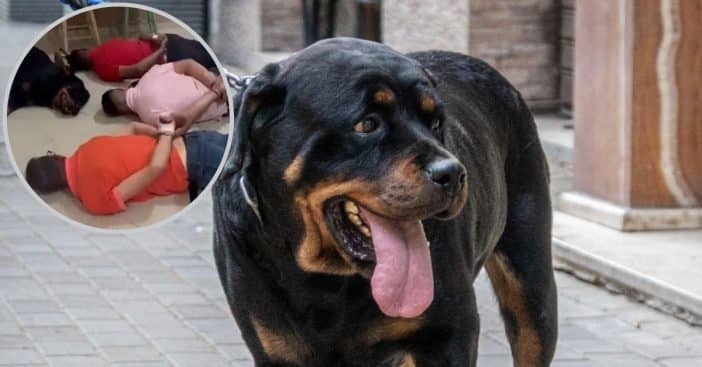 Dogs are known to be incredibly intelligent animals. They have a sharp sensory response that helps them detect threats in their environment, hence their use for security. Also, they possess strong loyalty, which is why they often are called man’s best friends.

Interestingly, a hilarious incident happened when a guard dog lay down next to its owners (a drug gang) during a police raid to prove its loyalty. This happened in Hortolandia, Sao Paulo state in Brazil, and the video has since gone viral and garnered a lot of comments on social media.

World’s most useless guard dog lies down next to drug gang in police raid… pic.twitter.com/e204eHE2BB

The trending footage shows the security operatives confiscating 1,176 bricks containing 1.1 tonnes of cannabis from the three suspects lying face-down on the floor with their hands cuffed behind their backs.

RELATED: Wounded Veteran Has Service Dog As Best Man At His Wedding

Unfortunately for the gang, the security measures they put in place didn’t pay off. Their guard dog, a Rottweiler, also mimicked them and laid beside them on the floor without causing a stir during the burst.

How the drug gang got arrested

Furthermore, the narcotics police revealed that the cannabis was transported to the house in Hortolandia from Campo Grande, Mato Grosso do Sul state. However, the cops had intelligence and were on the lookout for the delivery by closely monitoring the property (delivery location). This enabled them to coordinate a tactical interception of the drugs before they got distributed. Also, the authority claimed that the cannabis was going to be sold to people living in and around Campinas, Sao Paulo state.

However, the ‘loyal’ watchdog will not be convicted alongside its owners. The Rottweiler remains free to live with the woman who owns the land around the house, pending the review of the police to determine if animal protection services are needed.

Click for next Article
Previous article: Fans Claim That Sam Elliott Is Hollywood’s Most Handsome 78-Year-Old On His Birthday
Next Post: Sarah Michelle Gellar Took A Break From Acting After Robin Williams Died