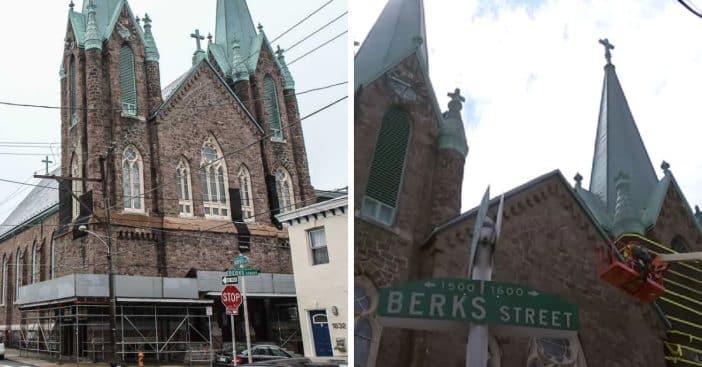 A shuttered 19th-century church in the city of Philadelphia is being demolished. Some folks who live in the area have been trying to save the church for years. Unfortunately for them, crews are now in place to take down the crumbling 140-year-old church called St. Laurentius Church in the Fishtown neighborhood.

The city began looking into demolition about a year ago but it took longer than expected to relocate utility poles and wires. There is a Catholic school located next door, so crews waited until the summer months when the kids were out of school.

St. Laurentius Church in Philadelphia is being demolished

A resident in the area named Margaret Ann Ramsey shared, “I don’t want to see a church, regardless of denomination, to come down. It’s always been part of the area, so it’s sad, especially for the people who belong to this parish.” This past week, many people came by to take one last photo of the church.

RELATED: These Churches Allow 225 Homeless People To Sleep Inside Every Night

St. Laurentius was built back in 1882 with donations from Polish immigrants and has been on the Philadelphia Register of Historic Places. The church closed in 2014 because it needed a lot of restoration done to it or else it may collapse. Unfortunately, they were not able to raise enough donations to fix up the church.

The church began to crumble in 2019, which cited concerns from the city and prompted talks of demolition. 6,000 pounds worth of rock fell and prompted the closing of the nearby school for two days. Watch the video below from CBS Philly to learn more about the demolition process:

RELATED: Jimmy Carter Shares That He Is “Absolutely And Completely At Ease” With Death While At Church Service

Click for next Article
Previous article: Elvis Presley: Why His Relationship With The Public Was Easier Than Being With Just One Lover
Next Post: How Olivia Newton–John’s Daughter Copes With Grief After Her Mother’s Death