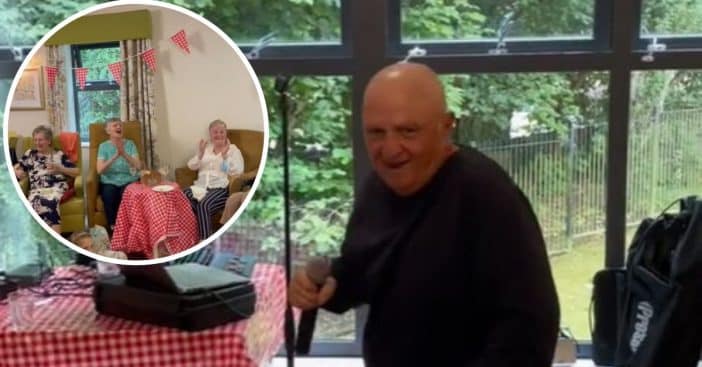 Dave Williams, an 81-year-old retired medical assistant, surprised residents and staff of a nursing home with his stunning rendition of “Unchained Melody” by The Righteous Brothers. His extraordinary performance shocked most people who had no idea that he had previously shared the stage with The Beatles.

On July 23, workers at Park View Nursing Home in Liverpool, England, organized a picnic event filled with play and refreshments so that residents and their families could have a good time. The guests had been treated to a musical performance by Toni Nesbitt, a local vocalist, before Williams requested an opportunity to sing.

Williams was given the opportunity to perform, and he made a stellar show singing with a voice that thrilled the whole audience. He revealed what happened while attempting to sing: “When I got up, my daughter was begging me to sit back down, but I’m glad I didn’t.”

RELATED: The Beatles: Origin Of The Popular Pop Band’s Name

“One of the audiences was a patient with dementia,” he continued. “After my performance, I saw her singing the song to herself, which was brilliant. I owe my life and my happiness to the National Health Service. I know it’s going through a bad patch, but it really is an excellent service with excellent people who give 100 percent.”

The audience was thrilled by the amazing singing skills displayed by Williams. The home’s Wellbeing Coordinator, Jodie Solaiman, speaking about the performance, said, “Words can’t explain how we all felt after his performance. Dave has lived an incredible life, to say the least. He has said he would love to perform for us again.”

He also posted the video to Park View’s TikTok. The video has since then been making waves and has brought adulation to Williams, who had no inkling of the response.

Looking Back At A Fab Past

Williams, who had been working for almost 50 years for the NHS, the United Kingdom’s Publicly funded health care system, revealed that music was what he fell in love with. He started singing at age 15, the same time he began working at Sefton General Hospital. His band, which he founded, known as the Dices, had its first appearance at the Morgue Skiffle Cellar in Broadgreen, Liverpool, in 1958 with The Beatles drummer Ringo Starr, who was not popular at the time.

He parted ways with the band and started a solo career at the age of 17, performing on weekends at small clubs in Brighton. During this period, he performed with the Fab Four at Knotty Ash Village Hall in Liverpool in 1961. He said ecstatically about the performance, “It was all surreal and something I will never forget. The gig at Knotty Ash was a bit awkward. I may have been a bit out of key, but I got a good clap.”

Also, he gave a performance on the occasion of Beatles singer Paul McCartney’s 58th birthday celebration on the 17th of June, 2000. The event was held at the Linda McCartney Center at the Royal Liverpool University Hospital, with scores of people in attendance, including Mel C of the Spice Girls. “At Paul’s birthday, people from around the world came to be there. I’ve been lucky to have these experiences!” he said.

Click for next Article
Previous article: A Rare Condition Made Ashton Kutcher Lose Vision, Hearing, And Mobility
Next Post: Whoopi Goldberg Earned $60M On ‘The View,’ But Her Daughter And Grandchildren Are Making Their Own Fortune