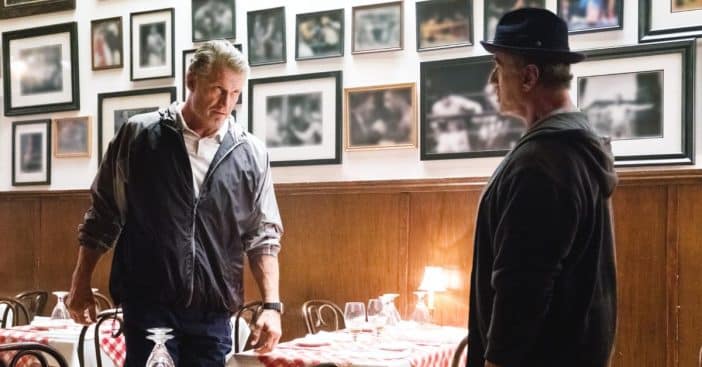 Rocky star Sylvester Stallone is very upset. After hearing the news that a spinoff is in the works, focusing on Dolph Lundgren’s character Ivan Drago called Drago, Sylvester shared his thoughts on social media. He criticized producer Irvin Winkler and Dolph in the post.

Sylvester wrote in a now-deleted post, “ONCE AGAIN, IRWIN WINKLER, this PATHETIC 94 year old PRODUCER and HIS MORONIC VULTURE CHILDREN, Charles And David, are once again picking clean THE BONES of another wonderful character I created without even telling me…”

He continued, “I APOLOGIZE to the FANS, I never wanted ROCKY characters to be exploited by these parasites…By the way, I once had nothing but respect for Dolph but he NEVER told me about what was going on behind my back with the character I created for him!!! REAL FRIENDS Are more precious than gold.”

Later on, he shared photoshopped images of Irwin as a vampire, sucking Rocky’s blood and stabbing him in the back. Sylvester added, “After IRWIN WINKLER And FAMILY SUCK ROCKY DRY! Presumed to be the most hated, untalented, decrepited [sic], Producer in Hollywood and his cowardly children have found their next meal… Drago, RETURN MY RIGHTS BLOODSUCKERS! Throughout history so many artists in every industry, recording, painting writing, you name it have been destroyed by these blood suckers Who have destroyed so many families, lining their pockets with other people! DOLPH, why? Not a phone call? #parasite producers #exploited artists victims.”

Sylvester has retired from the franchise and said that he previously fought for rights to the character and story he created. He said in 2019 that he has “zero ownership” despite being the creator and is not thrilled that they are creating a new film centered around Drago. Only time will tell if he will be able to halt production.

Click for next Article
Previous article: Arnold Schwarzenegger Pays Tribute To His Late Mother Before His 75th Birthday
Next Post: Richard Gere Hit Co-Star During Filming Of ‘An Officer And A Gentleman’