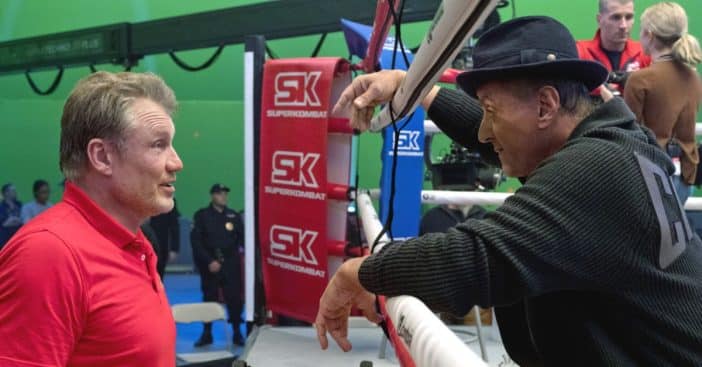 Sylvester Stallone was not happy when the press leaked that a Rocky spinoff is in the works. The new film is reportedly called Drago and focuses on Dolph Lundgren’s character Ivan Drago. Sylvester called out Dolph and the producer Irwin Winkler for “exploiting” the characters and trying to make money without him, under his nose.

Now, Dolph responded to the drama after Sylvester posted and then deleted several angry posts online. Dolph shared a photo of himself and Sylvester and wrote, “Just to set the record straight regarding a possible Drago spinoff. There’s no approved script, no deals in place, no director and I was personally under the impression that my friend Sly Stallone was involved as a producer or even as an actor.”

He added, “There was a press leak last week which was unfortunate. In touch with Mr Balboa – just so all the fans can relax…There ya go.” It sounds like a case of miscommunication and fans are hoping that things get resolved so that everyone is happy with the possible film.

RELATED: Sylvester Stallone Is Not Happy About The New ‘Rocky’ Spinoff ‘Drago’

Sylvester previously criticized Irwin in particular for keeping revenue from him. Sylvester was the creator of the original film and characters and he says that Irwin has not given him his share from the sequels.

Sylvester added about Dolph prior to Dolph’s response, “By the way, I once had nothing but respect for Dolph but he NEVER told me about what was going on behind my back with the character I created for him!!! REAL FRIENDS Are more precious than gold.”

Click for next Article
Previous article: Hoda Kotb, Jenna Bush-Hager Comment On Man’s Backhanded Tribute To His Fiancée
Next Post: ‘Star Trek’ Actors Pay Tribute To The Late Nichelle Nichols After News Of Her Death