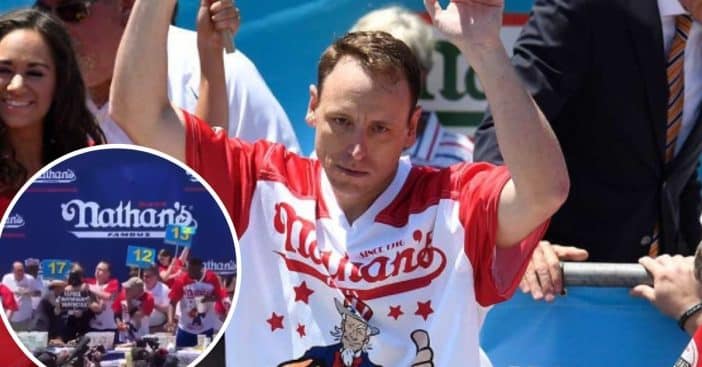 Joey Chestnut, the 15-time champion of Nathan’s Hot Dog Eating Contest recently won again this past Fourth of July. However, it was a bit more chaotic than usual when a protestor jumped on stage and Joey put him in a chokehold… all while continuing to eat hot dogs.

A hell of an asterisk to Joey’s performance today — not seen on ESPN.

A 21-year-old protestor named Scott Gilbertson jumped on stage with contestants and Joey put him in a chokehold because he wasn’t sure if he was dangerous or not. Joey explained, “I was freaked out a little bit because he had the mask on. I saw the mask and I think that’s when I realized he doesn’t belong here.’’

Scott responded, “I felt like it was unnecessary for sure. I had the mask on so I couldn’t see who it was. I assumed it was a security guard. And then when I saw the video, it was Joey. I was surprised.” Joey also felt it was unnecessary after everything happened and regrets the incident.

Joey said, “As soon as I grabbed the guy, I realized he was a kid. I felt bad afterwards. I was just amped up, just focused on getting back to eating. It’s just unfortunate. I wish that it didn’t happen. It’s a bummer.” Even with all of the chaos, he still won after eating 63 hot dogs and buns in 10 minutes.

Click for next Article
Previous article: Willie Nelson’s Granddaughter, Waylon Jennings’ Grandson Perform Acoustic Duet Of “I Can Get Off On You”
Next Post: Willie Nelson’s Ex-Wives Say He Was Never Very Faithful