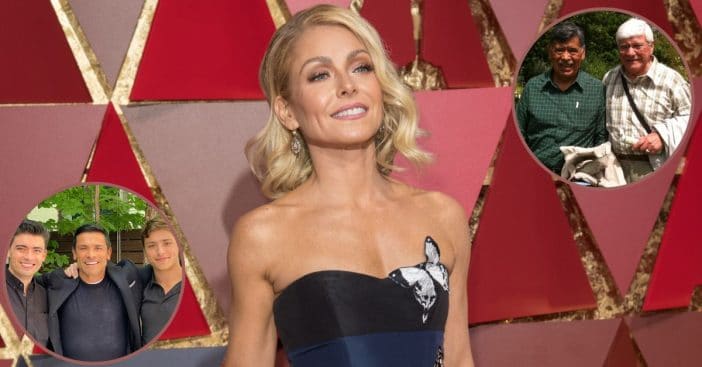 Father’s Day is a time to celebrate awesome dads, and Kelly Ripa does not miss a chance to show her husband, Mark Consuelos, just how much she appreciates him. The actress took to Instagram to pay a Father’s Day tribute, not just to her husband but to his dad and hers as well.

The happy couple got married in 1996 and have been together for 26 years since then. The proud parents often talk about their kids, Michael, Lola, and Joaquin. Her daughter Lola turned 21 on Father’s Day. “So my daughter was born on Father’s Day, so you have to take a picture of baby Mark Consuelos holding Baby Lola,” Kelly shared while going through photos of Lola on her Instagram stories. She went further to remind her fans and followers that she had called into Live! just after giving birth to Lola. “She was born at 6:30 a.m., but I called into the show, and Gelman had scheduled it.”

“He was like, ‘Try to get out of the operating room by 9:15”, she recounted. “I was like, ‘Guys, I have to be on the air.’ Talk about content- you think you making eggs is impressive. I was like, ‘If we could speed this c-section along!'” During the Thursday show, the Marvin’s Room actress shared Lola’s birthday plan for her sweet 21st. “It is Lola Consuelos’ 21st birthday,” she told the audience.

“We are waiting for her to get back- she’s in Europe right now. Yes, poor Lola. She’s actually finding an apartment for her study abroad,” she added. “She actually had a trip planned. The overseas vacation is serving as Lola’s last hurrah. After that, she’s off the family nipple, so to speak.” Her husband Mark also made a post of throwbacks to celebrate their daughter’s 21st birthday. “Happy 21st bday @theyoungestyung … we are so proud of you!! Love you so much, lolly!!!,” he wrote.

The couple’s new show, Family Reboot, debuted on Disney+ recently. The first episode was titled “The Family That Lassos Together, Stays Together.” The titles for each episode are nearly the same, except that the word lassos is replaced with other fun activities like cooking, dancing, singing, etc.

Kelly and Consuelos produced this show alongside Albert Bianchini of Milojo Productions to help families prioritize and spend time together. The six-part series, which the power couple executive produced, features families that slow down on their busy schedules to bond with each other on a weeklong trip. While on the trip, they do fun activities together like games, fun, and conversations. In this show, each family has a reboot guide.

RELATED: Kelly Ripa Regrets Getting A Tattoo Of Her Husband’s Last Name

Click for next Article
Previous article: Brian Wilson’s ‘F’ In High School Music Class Was Changed To An ‘A’
Next Post: Catherine Zeta-Jones Paid Tribute To Youthful Husband Michael Douglas On Father’s Day