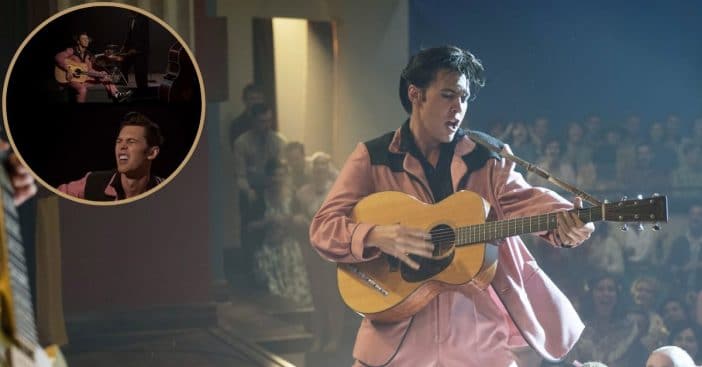 During the production of the movie Elvis, Austin Butler, who played the role of the King of Rock and Roll Elvis Presley, directed by Baz Luhrmann, totally got himself enthralled in the personality of Presley. He was not only attracted to studying the personality of the legendary musician, but he also gained a mastery of his speech, mannerisms as well as singing style.

This study took him three years before he could get to give a stellar performance of Elvis’s character. The commitment of Butler to the task was shown in a video clip showing the actor trying to sing like Elvis. The video was shared by the movie director on Twitter.

I feel I haven’t been clear enough in conveying that Austin sings all the young Elvis in the movie so forgive me. I thought you might find this 2019 camera test fascinating. Thank you @austinbutler for letting me share this early test to give the fans an insight into your journey pic.twitter.com/GgInZC2R1b

The director of the movie, Elvis, was intrigued by Butler’s performance of the legendary King that he shared a video clip test of the actor’s skill via Twitter in 2019. In the movie, Butler epitomized all of Elvis’s early songs unaided; as the character begins to grow, the movie director mixed Butler’s voice with recordings of Elvis in his mid-age so as to blend the tone of the songs used in the movie perfectly.

Captioning the video snippet which showed Butler performing the song “That’s All Right Mama,” the director commended the actor for his commitment to the role saying, “I feel I haven’t been clear enough in conveying that Austin sings all the young Elvis in the movie so forgive me. I thought you might find this 2019 camera test fascinating. Thank you, Austin Butler, for letting me share this early test to give the fans an insight into your journey.”

Austin Butler has not gotten over Elvis Presley’s character

It is almost a year after the end of the production of the movie, yet fans have discovered that the influence of Presley’s personality on Butler has not faded off. The actor seems to have taken up some of the legend’s mannerisms as well as his speech pattern. Reacting to these comments while speaking with Elle Australia, he said, “I hear that a lot, but I didn’t do anything else for two years.”

“That’s a large chunk of life, I’m not surprised that clicks in. I’m a shy person. When I know that there are bits of Elvis that I’d have to click into to go out on stage and be in front of a ton of people, there are triggers. You spend so much time obsessing about one thing, which is like muscular habits. Your mouth can change,” Austin further said.

Austin Butler, in an Instagram video, described the late music icon as an “extraordinary human being.” He said, “We all know the icon of Elvis, but what always fascinates me are the intricacies of the human being. He’s the American Dream.”

Talking about how he was able to master the role of Elvis perfectly, he stated that he was like a “sponge,” absorbing everything he could get about the life and music of Elvis Presley. “Reading every book I could get my hands on, watching everything, treating it like a detective. Also, working with different vocal coaches and working on that because the voice is so important for Elvis,” Butler stated.

Click for next Article
Previous article: Meet Michael Gandolfini, Son Of The Boss Himself Tony Soprano, Following In His Father’s Footsteps
Next Post: Lori Loughlin Appears On First Red Carpet Since Prison Sentence