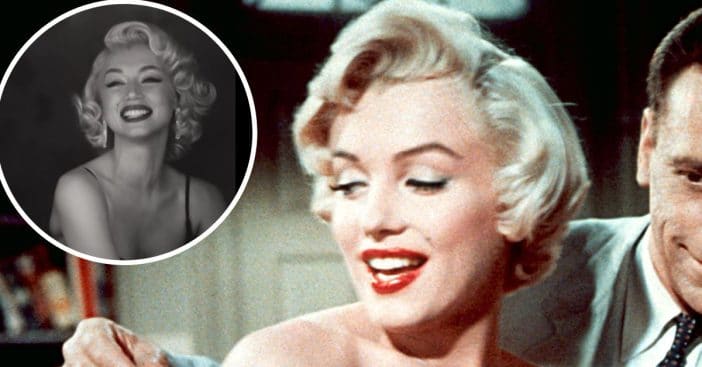 Actress Ana de Armas stars as Marilyn Monroe in the new film Blonde, which has been given an NC-17 rating by Netflix. The film, which the director promises will “offend everyone,” just released the first look at Ana as Marilyn.

Blonde gives a look into Marilyn’s life from her childhood as Norma Jeane and her glamourous and controversial career. Ana shared, “Andrew’s [the director] ambitions were very clear from the start — to present a version of Marilyn Monroe’s life through her lens. He wanted the world to experience what it actually felt like to not only be Marilyn, but also Norma Jeane. I found that to be the most daring, unapologetic, and feminist take on her story that I had ever seen.”

She added, “We worked on this film for hours, every single day for almost a year. I read Joyce’s novel, studied hundreds of photographs, videos, audio recordings, films — anything I could get my hands on. Every scene is inspired by an existing photograph. We’d pore over every detail in the photo and debate what was happening in it. The first question was always, ‘What was Norma Jeane feeling here?’ We wanted to tell the human side of her story. Fame is what made Marilyn the most visible person in the world, but it also made Norma the most invisible.”

Blonde is one of the only films on Netflix to receive an NC-17 rating, which caused some conflict between the director and the streaming service. However, he later said that he has “nothing but gratitude for Netlifx” for sharing the movie with the world. It will release on September 23.

Get a first look at the film and see Ana as Marilyn below. Will you be watching it when it comes out?