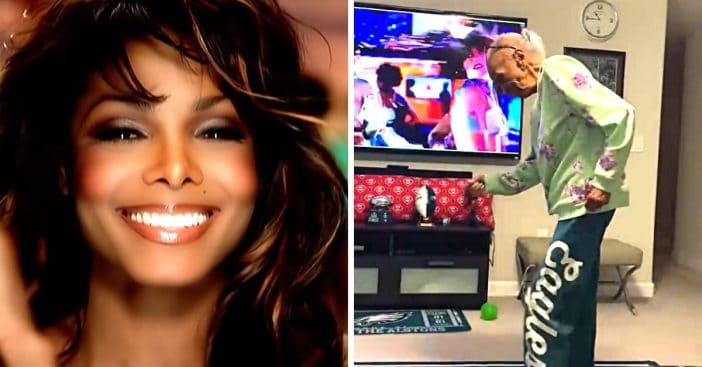 As long as there have been tunes to hum, music has held an unparalleled power over listeners. One 88-year-old proved the timeless power of music when she showed off her moves dancing to “All For You” by Janet Jackson. Her dance even caught the attention of the singer herself! Riverview, Florida resident Marybelle Alston won appreciation from social media this May thanks to a video of her dancing to the 2001 hit.

“All For You” shares its name with one of Jackson’s most innovative albums to date, and as a song, it helps get Marybelle dancing and tired out in time for bed. Jackson herself has given this new music video her seal of approval.

⁦@JanetJackson⁩ in the effort to getting my 88 year old mom tired and ready for bed, she dances to your song. Good luck to me 😅 pic.twitter.com/uRfu7tCDXR

On the evening of May 14, Danita Alston, 53, shared a video of her mother dancing in front of the TV. “@JanetJackson⁩ in the effort to getting my 88 year old mom tired and ready for bed, she dances to your song,” Danita shared in the caption. “Good luck to me.” The accompanying smile face has some sweat, possibly from worry, or likely from the workout the music inspires.

The video shows Alston, wearing a pair of Eagles sweatpants under a large green sweater, swinging her arms and moving around the room as the TV shows Jackson’s music video. In the time the video has been up, Alston’s “All For You” dance has gained over a million views. One of those views came from Jackson herself.

Janet Jackson shares her love for the dance video

Just three days after Alston danced her way into people’s hearts, she received a renewed wave of attention when Jackson herself shared the video to her Twitter feed. “I luv it,” she wrote, complete with a hug, some more dancing, and her signature blue heart. Her followers voiced their appreciation for Jackson, the video, and at the fact that she got to watch it herself. A fan receiving some love from her musical idol is something worth celebrating.

Jackson also celebrated her birthday last month, turning 56 on May 16. Since ’74, Jackson has been breaking barriers, changing conversations, and setting records. Just last year, her album Control reached number one on the charts, a first in 35 years. It was her third studio album that came out in 1986 and stayed t the top of the charts for 91 weeks. So, if Alston needs more songs to dance her way to a restful night sleep to, she has plenty of options.

Click for next Article
Previous article: Tom Hanks Isn’t Happy With One Of His Most Popular Films
Next Post: Mother-In-Law Shocks Bride By Rocking Same Gown With Her On Wedding Day