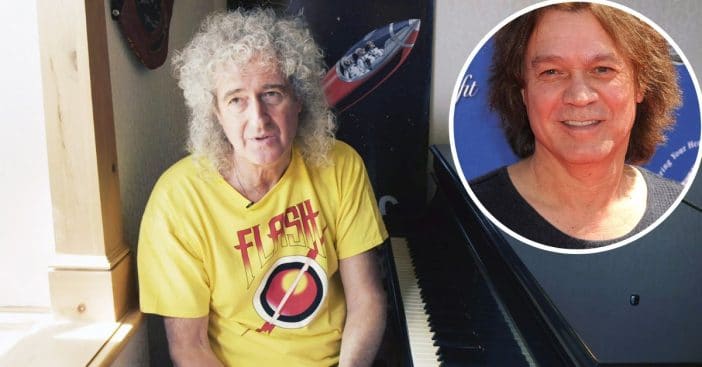 Rock legend Eddie Van Halen passed away in October 2020. Since then, many artists are sharing stories of the fun times they shared with Eddie. One of these artists is Queen’s Brian May. He admitted that he wishes he kept in touch more with Eddie before his passing.

Brian then shared a story of a wild night involving Eddie after a Queen concert. He said, “I have a lot of favorite memories, but I do remember one time him coming to see [Queen] play. We went back to the hotel afterwards. He’d brought a bottle of his favorite drink with him, which I think was Southern Comfort. Anyway, he’s knocking it back, and so I started knocking it back, and I completely lost it.”

He continued, “The next thing I remember I was on the floor in the bathroom, having fallen down and cracked my head on the washbasin. I don’t even remember going into the bathroom. It’s one of the few times in my life where I’ve gotten out of control.”

Brian and Eddie first met when their bands opened for Black Sabbath. They became fast friends and bonded over their love of guitars, showing each other their custom instruments. Brian once joked, “I sounded like me on his guitar and he sounded like him on my guitar.”

Can you imagine partying with Brian May and Eddie Van Halen?

Click for next Article
Previous article: The Cast Of ‘Hawaii Five-O’ Then And Now 2022
Next Post: ‘Magnum P.I.’ Reboot May Be Returning In The Fall After All