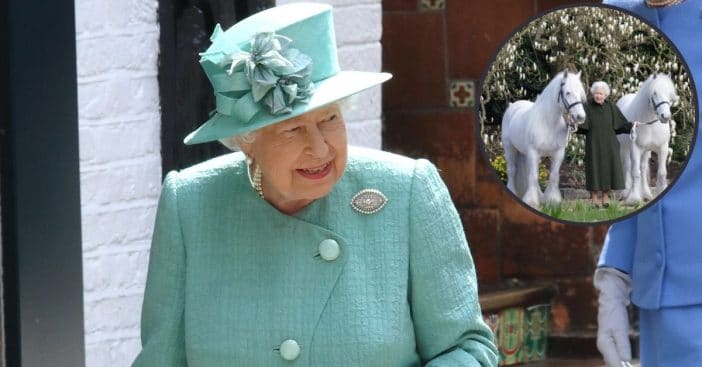 Queen Elizabeth turns 96 years old on April 21st and is celebrating the occasion with a new majestic photo. In honor of her 96th birthday, a new portrait of her was released by the Royal Windsor Horse Show.

The portrait was taken last month on the grounds of Windsor Castle, showing the Queen standing between her fell ponies, Bybeck Katie and Bybeck Nightingale. She dons a dark green cape-style coat as she holds onto the reigns of the ponies under a Magnolia tree.

The Queen commemorates her 96th birthday with private celebration

Ahead of The Queen’s 96th Birthday tomorrow, @windsorhorse have released a new photograph of Her Majesty.

Taken last month in the grounds of Windsor Castle, The Queen is pictured with two of her fell ponies, Bybeck Katie and Bybeck Nightingale.

Her Majesty will sadly be spending a lot of time for her birthday in a place filled with memories, without her beloved husband Prince Philip by her side as he passed away last April at age 96. Most recently, Queen Elizabeth traveled to her Sandringham estate in Norfolk and is believed to be staying at Wood Farm, which is the home where Philip spent most of his retirement in. This year, the Queen is reportedly spending her birthday privately.

RELATED: Queen Elizabeth Reportedly ‘A Lot Better’ After Having COVID-19 Despite Death Hoax

It’s really no surprise that the new photo of Elizabeth also includes her beloved horses as she has always had a fondness for horses. She was given her first horse when she was just four years old and is also known to get quite animated when at horse-racing events. The Queen herself reportedly hasn’t ridden since early September of last year. “She was in quite a bit of discomfort,” a source close to the Queen told The Sun. “She adores riding, and it has been part of her ritual for most of her life. She has been extremely disappointed not to go riding since the beginning of September.”

Her love for horses and horseback riding has been passed on to the new royal generation as well, as the Queen’s daughter, Princess Anne, became the first British royal to compete in the Olympics when she rode in the equestrian event at the 1976 Games in Montreal. Also following in the Queen’s footsteps—and her mother’s—is Anne’s daughter, Zara Tindall, who competed in the 2012 Olympics and won a silver medal as a member of the Great Britain Eventing Team.

An inspiration to so many across the UK, the Commonwealth and the world, it’s particularly special to be celebrating in this #PlatinumJubilee year. pic.twitter.com/iWfyorcd8I

The Queen’s birthday has been celebrated by other members of the royal family. Prince William and Kate Middleton shared birthday wishes on their account, saying, “Wishing Her Majesty The Queen a very happy 96th birthday today! An inspiration to so many across the UK, the Commonwealth and the world, it’s particularly special to be celebrating in this #PlatinumJubilee year.”

Prince Charles and Camilla, Duchess of Cornwall also shared their birthday wishes alongside several photos. “Wishing Her Majesty The Queen a particularly special 96th birthday today, as we celebrate her Platinum Jubilee year,” they wrote.

Wishing Her Majesty The Queen a particularly special 96th birthday today, as we celebrate her Platinum Jubilee year. 🎈 pic.twitter.com/CJSMTjOMBp

— The Prince of Wales and The Duchess of Cornwall (@ClarenceHouse) April 21, 2022

RELATED: Queen Elizabeth Celebrates And Mourns On 70th Anniversary Of Her Reign