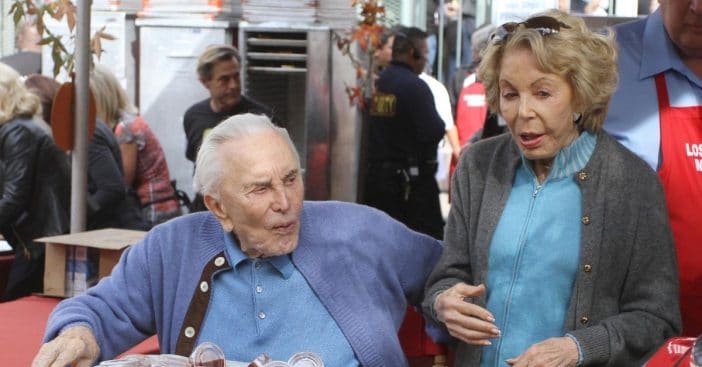 Kirk Douglas’s life was a rollercoaster with numerous ups and downs. The Hollywood star came from an impoverished childhood and worked all the way up to stardom; however, three significant events rocked his life, which made him rethink, and his wife, Anne Buydens helped him through the most difficult period of his life.

The Champion star married Anne Buydens in 1954 after his first marriage to Diana Dill collapsed. Diana took her two children to New York and Kirk became less present in his son’s life. His marriage to Anne was blessed with two children, Peter and Eric. However, Eric died in 2004. Anne stayed with him through thick and thin till the end of his life.

How Anne Buydens Helped him through his depression

Kirk wasn’t a faithful man from the early start of the marriage, “He was a typical Hollywood ladies’ man, sleeping with stars like Rita Hayworth and Joan Crawford.” Even the marriage with his first wife was messy, “He was wild in those years.”

RELATED: Look Back At Family Photos Of Kirk Douglas Over The Years Celebrating His Life

However, the dutiful wife accepted her fate and dealt with it as best as she could. “Kirk never tried to hide his dalliances from me,” the European wrote in 2017’s Kirk and Anne: Letters of Love, Laughter, and a Lifetime in Hollywood. “As a European, I understood it was unrealistic to expect total fidelity in a marriage.”

The Honorary Oscar winner had his first brush with death in 1991 with a Helicopter crash that killed two people. Luckily, he survived. “I feel that every brush I had with death changed me and made me a better person; I began to think less about myself and more about other people,” Kirk stated in his 2007 memoir Let’s Face It.

A few years later, he came down with an incapacitating stroke that affected his speech permanently; during this period, he plunged into depression and nearly committed suicide.  “He actually took a gun and put it in his mouth,” a close family friend said.

His last son’s death further broke him. Eric Douglas died from an overdose at age 46 in 2004. He was in deep grief and started to blame himself. “Anne’s first reaction was guilt, but I felt it was all my fault,” Kirk recalled.

However, the death brought them closer. Anne helped him get through the depression and encouraged him to stay consistent with his therapy, “Anne would say, ‘Get your ass out of bed and work on your speech therapy.’ That helped,” Kirk said.

To honor their dead son, the couple donated $188 million to worthy causes through their charity in their lifetime. Kirk Douglas died in 2020 at the age of 103; Anne Buydens died a year later at 102.

Rabbi David Wolpe, a close friend of the family who helped Kirk with his Torah studies, said Kirk mellowed in his later years, and it helped him be a better person. He had a full life, and he died a very grateful man.”

Click for next Article
Previous article: ‘GMA’s Robin Roberts Shares Hopes And Hardships Working From Home Caring For Partner
Next Post: George Thorogood’s “Bad To The Bone” Was Groundbreaking For The MTV Scene