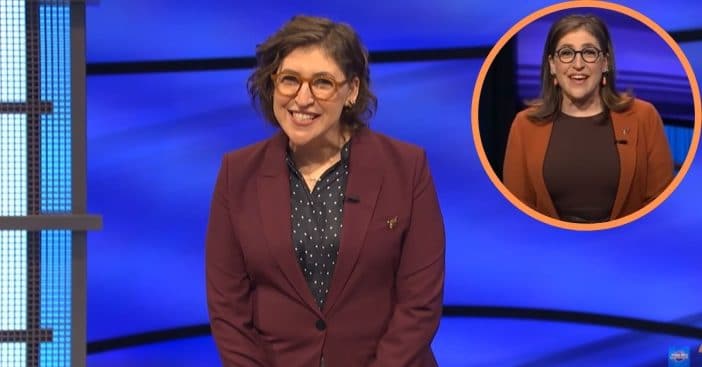 Since its 1964 debut, Jeopardy! fans have stayed very passionate about the game show, learning trivia and supporting hosts with each new episode. Mayim Bialik made her return to hosting, alternating with Ken Jennings, and social media is abuzz with chatter, though this time the discussion is about her wardrobe.

Specifically, a blazer of hers. The burnt orange accessory seems to have fallen victim to the Mandela Effect, which sees Jeopardy! viewers debating if they had seen this already and why Bialik looks so stylish recently. Bialik spoke on The Drew Barrymore Show to react to this intense response from fans.

Jeopardy Host Fashion 3/30/22
Mayim Bialik
Finally grabbed screenshots for this look from last night! She has worn this brown dress with a lighter tan blazer before, but she switched it for a rust orange blazer this time! Love the hair and dangly earrings!#Jeopardy pic.twitter.com/PZRrt83xAg

On Twitter, Jeopardy! viewers shared their reactions not exclusively to questions and responses from the trivia segment of the show, but rather to Bialik, specifically her wardrobe and style in late March. User @OneEclecticMom happily announced, “Finally grabbed screenshots for this look from last night!” The user shared pictures showing Bialik with her usual wavy hair straightened while she wears a knee-length brown dress under a burnt orange blazer. “She has worn this brown dress with a lighter tan blazer before, but she switched it for a rust orange blazer this time! Love the hair and dangly earrings,” the caption reads.

Mayim Bialik responds to the reactions her blazer has generated

“I will never wear that blazer again. That’s it. Done!” Bialik joked when she and Barrymore discussed the online reaction the top’s return provoked. Though that might mean sacrificing some comfort, as Bialik has said the jacket has the sleek look of a blazer with all the quality of a sweater. But fans have keen eyes, as Barrymore notes, “Just an absolute observant obsessive commenting about how you repeated a jacket.”

That's right! I repeated a blazer! You caught me! And I'll do it again! 😉🤣#repeatoffender @edailypop #jeopardy pic.twitter.com/WbcfYaKNLS

Bialik joked more about it online, mentioning a “budget” with an accompanying video and caption reading, “That’s right! I repeated a blazer! You caught me! And I’ll do it again!” Though, she notes, male hosts repeat outfits all the time. “I mean, look, for men in these hosting positions,” Bialik pointed out, “they also change clothes every episode, but they wear like, a blue suit, a black suit, a gray suit, and they just change the ties. It’s less noticeable.” Meanwhile, over at Wheel of Fortune, the wardrobe department allegedly has Vanna White never wearing the same dress twice, for a total of roughly 5,7000 different gowns. Has anyone noticed repeats that slipped through the cracks?