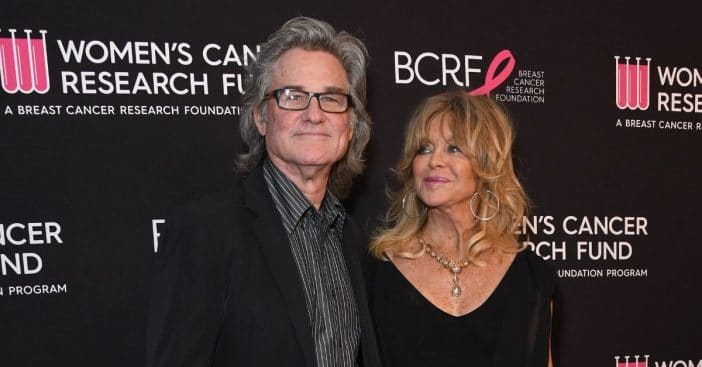 Kurt Russell and Goldie Hawn have been going on strong for thirty-eight years as a happy couple. The duo plays Santa Claus and Mrs. Santa Claus in the new Netflix film, The Christmas Chronicles 2. They both make love look so good in real life and reel life.

The duo first met in 1966 on The One and Only, Genuine, Original Family Band set. Although their romance did not start until 1983, when they met again on the set of their second film- Swing Shift, Godie admits there was a spark. Kurt was only sixteen and Goldie twenty-one when they first met.

How Did Kurt Russell and Goldie Hawn Meet?

“I was 21, and he was 16, and I thought he was adorable, but he was much too young. And then years later, we met up again, and I liked him and remembered that I liked him very much when I first met him.” Goldie told Desert Island Discs on BBC Radio 4.
Both of them had been previously married, with Goldie having two ex-husbands- Bill Hudson and Gus Trikonis, and Kurt to his ex-wife- Season Hubley.

They have formed a beautiful blended family bringing in children from their previous marriages. Kurt and his ex-wife, Season Hubley’s marriage lasted from 1979 to 1983. They both share a son named Boston.

Unlike how traditional romance is supposed to “end” (or continue), the love birds never got married. It might seem strange that they have been together for close to four decades and never said “I do” to each other, but they both have good reasons for their choice, and it has proven to work very well for them.

“A lasting relationship isn’t about marriage; it’s about compatibility and communication. And you both need to want it to work,” Goldie says.

The couple revealed that their secret recipe to a lasting happy relationship is an intentional focus on living a happy life as a family and lots of goofy laughter. Kurt emphasized how Goldie is the funny one in the relationship, making him laugh by just being her.
“Goldie can literally walk away sometimes and make me laugh. She’s funny by nature. She just…is.” Kurt gushes.

Despite tough times, they also shared the importance of wanting to be together. “Relationships go through periods, sometimes really hard times. But there’s nothing sweeter than having a family, and that is worth everything.” Goldie shares.

Click for next Article
Previous article: Jodie Sweetin Gets Honest About Her Interfamily Adoption
Next Post: Fans Got A First Look At The Final Movie ‘Halloween Ends’ At CinemaCon