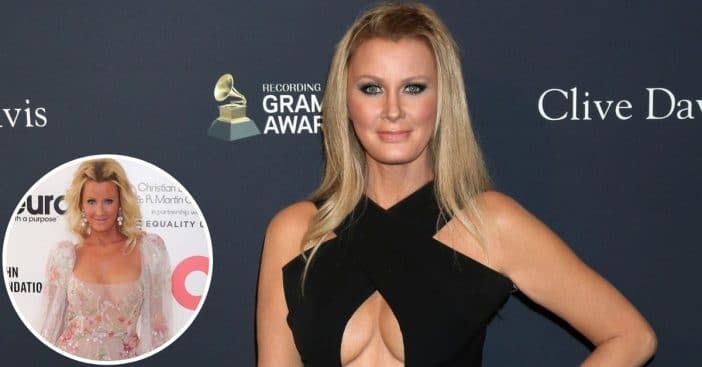 The fully sheer dress was embroidered with flowers and vines, accessorizing on her own with a vintage pearl-shaped Chanel minaudière, Senso Saint Tropez pearl and diamond earrings, and Christian Louboutin sandals.

Sandra Lee stuns in her very own ‘F U Cancer’ dress

Lee underwent a full hysterectomy in early March, which is usually performed to remove the womb so you can no longer get pregnant. A representative told People Magazine that the “surgery was a success and she’s resting comfortably” following the procedure.

She has since been keeping her fans updated over the last month on her health struggles. “It makes me so happy to read your notes…Regarding the surgery – honestly it was a bit rough, but I am resting (hard for me you know I like to work), I am sleeping a lot and I have set my alarm to stay ahead of the pain relief medication, Lordy this is painful I have to say,” she wrote the day after her operation.

In a separate update a few days later, she revealed that boyfriend Ben Youcef took her to the hospital when she wasn’t able to get food or water down.

“Surgeries are so brutal but I’m still glad I did it. Once they got the IV in, wonderful anti-nausea meds I felt much better,” she wrote at the time. “Ben stayed with me as long as he could, he was so patient. To take my mind off of what was going on we researched beautiful villages that we could drive to this summer. I have such Wanderlust. No amount of time on this beautiful planet will be long enough.”

Lee had originally undergone a double mastectomy in May 2015 after being diagnosed with breast cancer. In August 2015, she was rushed to the hospital with an infection following the mastectomy. It was a really troublesome time for her as she navigated her new health woes.

“She has tried hard to avoid surgery, but with no luck,” her rep said at the time. “She just wants to finish this part of her life and be healthy and well. She would like to fast forward to the future.”