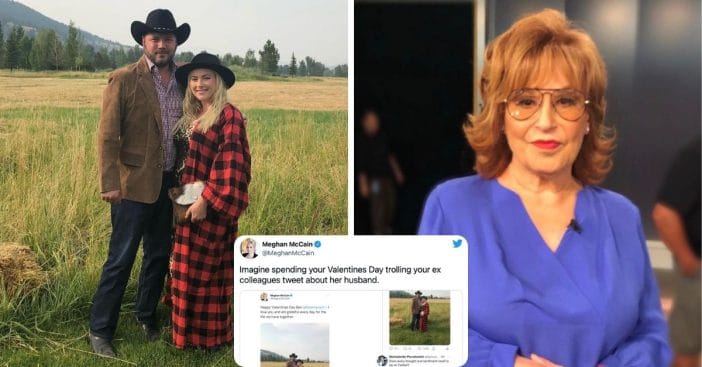 Meghan McCain just called out Joy Behar for leaving rude comments on her Valentine’s Day post on Monday. McCain shared a tribute to husband Ben Domenech on Valentine’s Day—as mostly every couple did for one another that day—and Behar came down on the post publicly.

“Happy Valentine’s Day @bdomenech,” the original post from McCain read. “I love you and am grateful every day for the life we have together.” In response to the post, a random online user said, “Does every thought and sentiment need to be on Twitter?” to which Behar wrote in a now-deleted reply, “Apparently.”

And the entire interaction may have since been deleted, but McCain captured the whole thing before Behar could erase her part. “Imagine spending your Valentines Day trolling your ex colleagues tweet about her husband,” she said, sharing screenshots of what happened.

Fox News co-host Janice Dean was one of the many people who chimed in after that, saying, “She can’t quit you,” to which McCain responded, “It’s pathetic and it creeps me out.”

McCain and Behar are no strangers to hashing it out in public. McCain had previously been a co-host on The View for four seasons before quitting, then coming out about the toxic work environment on the show as the lone Republican there. She often got into a lot of disagreements and even flat-out arguments and screaming matches with the co-hosts, but not as often as she clashed with Behar.

“The idea of [a] show dedicated to women having conversations that our society reserves for men is important and necessary in our culture. But there are some things about the show that feels stuck in 1997,” McCain wrote in her memoir, released in 2021. “In this era of dismantling toxic work environments and refusing to accept the poor treatment of employees, how is The View still immune?”