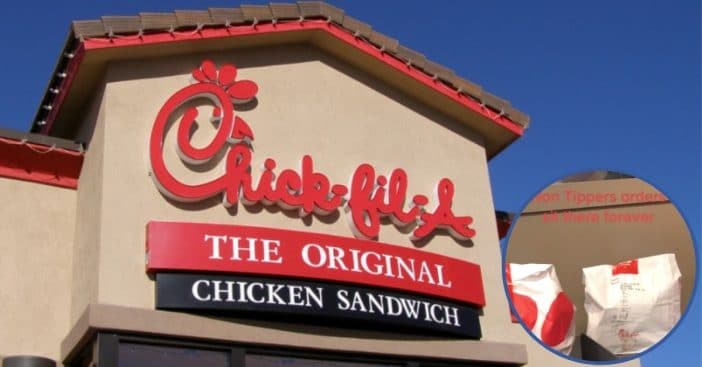 DoorDash driver and TikToker @drivingaddict1 posted a viral video on the app, showcasing alleged no-tip orders sitting at a Chick-fil-A location. The TikToker says that no-tip orders often sit on the counter “forever” and he documents his own experiences with being a DoorDash driver, and his video about picking up orders from Chick-fil-A is his most popular with over 203,000 views.

Of course, this garnered a ton of attention and various reactions. Some commenters disagreed with the TikToker’s implication that DoorDash drivers should be tipped, or that people who don’t tip deserve bad service. The concept of tipping is often heavily debated as many believe tipping is totally optional and shouldn’t be demanded, and others know that delivery drivers, servers, etc. often rely on tips to make a decent living.

“I’m glad I have a car & don’t ever need to use services like this,” says one commenter. “This is getting out of hand with demands for tips.”

“People need to learn that they are not automatically entitled to tips,” another says. “Tipping is for good prompt service.”

In response to all the comments, the TikToker shared a video about why he feels he and other delivery drivers should be tipped. “Naysayers, for the trolls, the haters… when you’re hungry, when you’re drunk as f–k at 4 am, you’ll be thankful for a Dasher or a UberEats driver, man. That’s all I’m gonna say.” He was directly responding to people who claim being a DoorDash or delivery driver, in general, is a “low-skill job.”