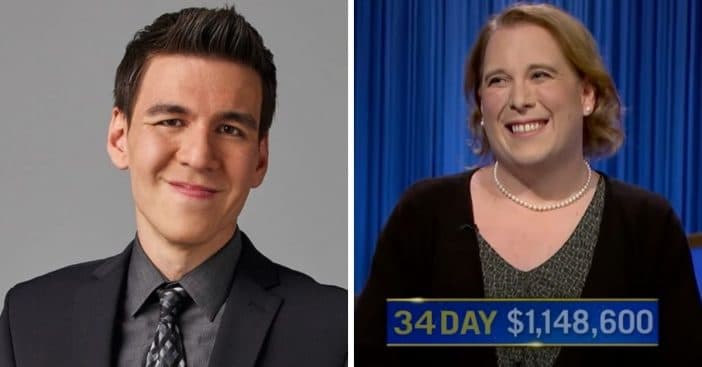 James Holzhauer, one of Jeopardy!‘s greatest, has spoken out on the newest champion Amy Schneider following her massive wins. In a recent episode, host Ken Jennings kicked off the show by declaring that Schneider had responded correctly to over 1,000 clues and that she was tied with James’ record of 32 consecutive games won.

That’s when she went on to snag her 33rd win, proving that she could overcome any pressure thrown her way. She ended up with $1,111,800 in total earnings.

Big congrats to @Jeopardamy on her 33rd win!

This means James got bumped down to fourth place and aired his thoughts out online. “Big congrats to @Jeopardamy on her 33rd win!” He writes, then adds jokingly, “This makes three eligible players in the 30+ game millionaires club 🤔.”

After claiming this victory, Schneider said she didn’t think it was possible to achieve. “I’m just blown away,” she said in an exclusive interview. “I have said I did start to think about this number a while ago, but it was really, I didn’t really think so. That only two other people have done this is just hard to wrap my mind around.”

Now, she’s looking ahead to see what’s next for her. “I do think a little bit about the bigger numbers down the road, but can’t get there without getting to 34 first,” she said. Well, January 18th, Schenider won her 34th game, continuing her streak and continuous achievements with Jeopardy!. This now brings her closer to trumping Matt’s 38 games won, and at this point, she’s proving it’s absolutely possible.

Click for next Article
Previous article: Meet Michael J. Fox’s Family — His Grown Up Son Looks Just Like Him!
Next Post: Jenna Jameson’s Partner Claims That She Doesn’t Have Guillain-Barré Syndrome