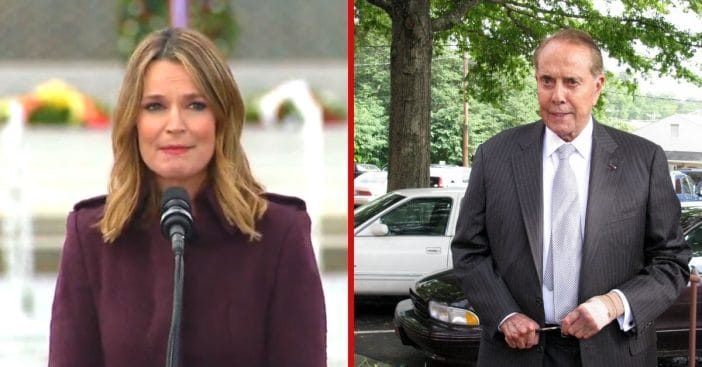 The passing of Bob Dole on December 5 prompted a time of mourning from Americans of numerous backgrounds, including Savannah Guthrie of TODAY. Guthrie, 49, paid tribute to the late senator and World War II veteran during a ceremony on Friday honoring his memory.

The event was hosted at the World War II Memorial in Washington D.C., a venue that was made in part thanks to Dole, who spearheaded corporate fundraising alongside FedEx president Frederick W. Smith. Public icons and politicians from across the aisle were seen and heard honoring the late politician. Among those who spoke at the ceremony, Guthrie was the first and discussed Dole’s character in his work life and family life.

.@SavannahGuthrie: "Bob Dole finished his race. He fought the good fight. He kept the faith." pic.twitter.com/mVrTJ2BU9v

A ceremony celebrating the life of Bob Dole and mourning his passing took place on Friday and featured party leaders, journalists, and even entertainers paying tribute to him. Guthrie, for her part, first noted the fitting nature of the venue, noting, “This monument is made of stone. His life was a flesh-and-blood monument to the values that we revere here.”

On a personal note, Guthrie and her family actually befriended Dole and his. Back in 1975, Dole married former Senator Elizabeth Hanford and the two remained together until his passing. However, Guthrie was privy to a relationship that set the standards for love. She calls the love between Dole and Elizabeth “eternal and unbroken,” adding, “It is how you will hold hands with him until you meet again.”

According to the TODAY anchor, he extended sentiments of friendliness to Guthrie’s family, which includes communications consultant Michael Feldman and their children, daughter Vale and son Charles. The Guthrie-Feldmans and the Doles actually spoke over FaceTime, guest-starring some excited dogs. Additionally, she shared that Dole would send her family books, words of encouragement, and even some treats. That was sweet, and his humor could be stinging; Guthrie recalled a chat with Dole while she had to work from her basement. “He didn’t miss a beat,” she shared, “and said, ‘Well, I guess you really hit rock bottom now.”

In this instance, Guthrie had a chronology of Dole’s service to the country to honor as well as his friendship.