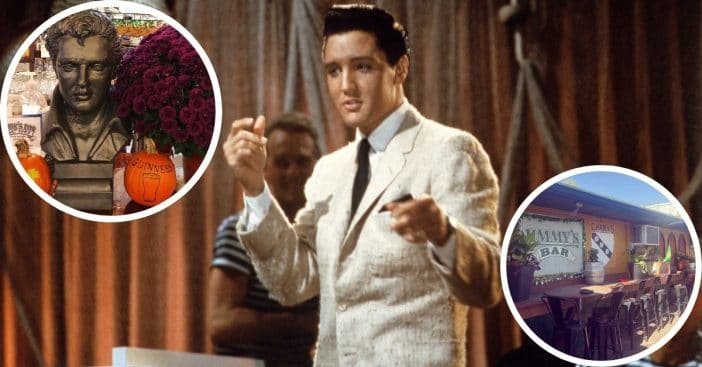 Jimmy’s Bar in Peoria, Illinois typically housed a place for patrons to unwind, along with a very distinct bust of Elvis Presley, which had become something of an iconic fixture at the establishment. However, that bust ended up stolen, and the subsequent story reported in the Washington Post, Associated Press, and The Independent made the case go viral. Now, though, all those readers can take in the news that the decoration has been returned.

The Facebook page for Jimmy’s Bar shared a post announcing the disappearance on Wednesday, October 27, simply urging for the bust’s return and promising no repercussions. Other outlets picked the story up, and the decoration-turned-mascot is back home.

A bust of Elvis Presley was a beacon for patrons

Located at 2801 W. Farmington Road, Jimmy’s Bar was proudly capped by a metal bust of Elvis Presley himself. Then, one Sunday late in October, visitors saw it was gone. Later that week, owner Jimmy Spears took to Facebook offering the thief a chance to simply “bring [Elvis] back,” with “no questions asked. Soon, the story was picked up by other major outlets, and just as suddenly as it went missing, the bust returned home.

Employees Molly Schiefling and Maeve Ardis saw the bust on the porch outside Thursday night. Why? Spears credits the traction it gained online. “The story,” he explains simply. “It went viral.” Within days, viral attention saw the safe return of a gift that has been with Spears for 15 years now, since his niece saw the item at a garage sale and got it for him.

The story isn’t done gaining attention, though. It had a happy resolution when, earlier on the night of the discovery, Jimmy’s Bar received a call. After some debate – spam runs rampant everywhere – they answered, and the caller said, “Please go check the porch. I am really sorry! My drunk friend took it over the weekend.”

Since Jimmy’s Bar can get very busy, especially on weekends, Spears suspects someone simply walked out with the Elvis Presley bust on Friday or Saturday. It is not worth a significant monetary amount; indeed, in one post featuring the bust story, Spears wrote, “$13 still up for grabs.” But to him it is a treasured gift and to patrons, it is a mascot for Jimmy’s Bar. Though, Spears does anticipate increasing security around the metal artwork.

Click for next Article
Previous article: ‘Wheel Of Fortune’ Fans Creeped Out After Halloween Puzzle
Next Post: Ozzy Osbourne Is Concerned He May Never Tour Again