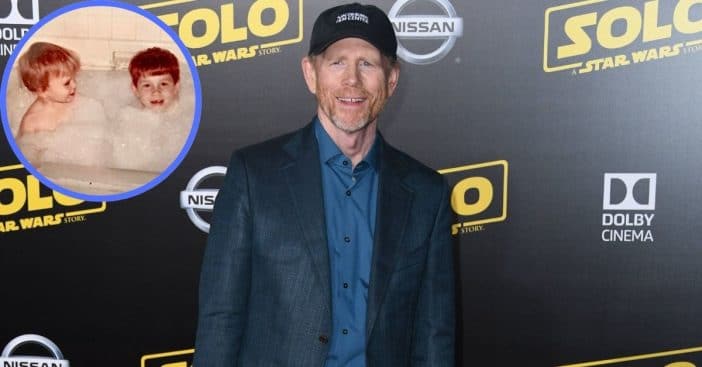 From 1960 to 1968, Ron Howard became a household name playing young Opie Taylor in The Andy Griffith Show. Ron Howard was roughly six years old when he worked that role, all the while growing up alongside his brother and another future big name in the industry, Clint Howard.

Over the course of two years, little Clint appeared in five episodes of The Andy Griffith Show, truly making it a family affair. Howard referenced the days of working on that show in his new memoir, The Boys. Learn more about his throwback photo and upcoming book here.

Join ‘The Boys’ on a walk down memory lane

A pic which didn’t make it into our memoir https://t.co/gYXtaEWCD7 Clint & I have been getting a lot of fun feedback on the photos in the book. Thanks to all who’ve given it read or a listen. We’re gratified that you’ve enjoyed getting to know more about our childhood journeys pic.twitter.com/UjXuoRJK45

Under Harper Collins Publishers, The Boys joins “award-winning filmmaker Ron Howard and audience-favorite actor Clint Howard” in a candid and loving revisit to their unique childhoods as child actors – and sibling child actors, as well.

The book was released on October 12th and features both anecdotes from Clint and Ron Howard and photographs, such as Howard and his parents in his very first acting role, as well as Clint’s very first resume, complete with agency phone number. Though it already promises many firsthand accounts and documents, not all photos that could have made it in actually did.

On October 31, Howard shared a post and photo to social media. “A pic which didn’t make it into our memoir,” he announced it as, also sharing the link to the book’s site through Harper Collins. The caption goes on to explain, “Clint & I have been getting a lot of fun feedback on the photos in the book. Thanks to all who’ve given it read or a listen. We’re gratified that you’ve enjoyed getting to know more about our childhood journeys.”

Howard responded to an excited comment and provided more contextual information. He specified, “This was taken when we were living in a rented old 2 bedroom bungalow style place in #Hollywood near the #DesiluStudios where we were filming the series #TheAndyGriffithShow #1961.” Desilu Studios was actually the television production company founded by the original sitcom power couple Lucille Ball and Desi Arnaz. Little could either brother have known they would be beloved icons in their industry too, with accolades like the Opie Awards inspired by their show.

Click for next Article
Previous article: Steve Buscemi Dresses Up As His Own Hilarious Meme For Halloween
Next Post: Mariah Carey Teases An Early Holiday Gift For Fans Coming This Week