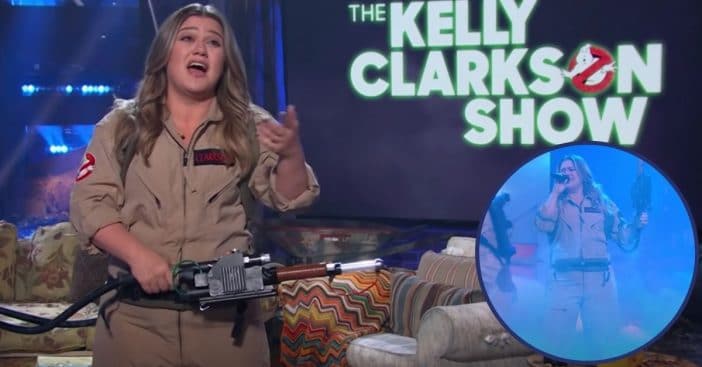 Kelly Clarkson just channeled her inner Ghostbuster with the newest Kellyoke karaoke segment on her show. Clarkson brought the spookiness to her daytime talk show just in time for Halloween, decked out in complete Ghostbuster gear just like in the classic ’80s film. Best of all? The performance is complete with choreography as well and audience participation.

“Well, as you can see, I am one of the newest members of the elite team of Ghostbusters,” Clarkson said after her spookified performance. “You’re welcome, Ghostbusters, I am quite the addition.”

“I’m sweating, I’m getting ripe in this and they’re not going to want it back, so I’m going to be able to keep it… It’s real sweaty and gross up in here!”

The classic ’80s song has a special family connection for Clarkson

The Ghostbusters theme sung by Ray Parker Jr. has a special family connection for Clarkson. She admits that it’s her 5-year-old Remington’s favorite song at the moment. “I have to play it before bed almost every night. He makes me play the video, the Ray Parker video. Not a joke, really loves it,” she reveals. “Don’t even think he’s seen ‘Ghostbusters.’ He’s 5. I don’t think he’s going to see this new one, but he just loves the song, thinks it’s cool.”

As Clarkson was wrapping up her Kellyoke segment, she earned a surprise from an original Ghostbusters cast member, Ernie Hudson, who played Winston Zeddemore in the first two Ghostbusters movies.

Hudson is slated to return as Winston in the upcoming Ghostbusters sequel. Bill Murray, Dan Aykroyd, Sigourney Weaver, and Annie Potts will also be reprising their original roles. The sequel film is slated for a November 19th release.

Check out the full Kellyoke performance below:

Click for next Article
Previous article: Daniel Craig’s Advice For The Next James Bond Actor
Next Post: Henry Winkler Got The Role In ‘Barry’ Over Another Famous Actor