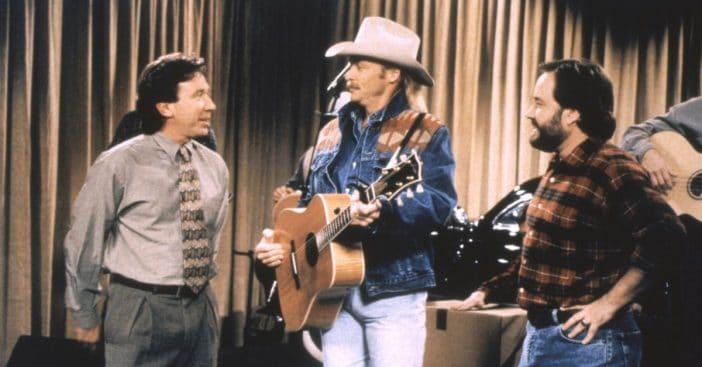 Alan Jackson is a country star but he once appeared on the nostalgic sitcom Home Improvement. Do you remember the episode that he appeared in? Alan recently reminisced and shared a scene from the episode to his Twitter account. Fans quickly jumped in to talk about how much they loved the episode from the ’90s.

In the episode, Alan stars as himself. Tim Allen’s character Tim Taylor has his own show called Tool Time. He often brings on guest stars and Alan showed up in one episode. Tim thinks the Mercury car is the guest and is corrected and told it the car is none other than Alan Jackson’s!

Alan Jackson once appeared on the show ‘Home Improvement’

#Throwback to a little Mercury Blues on #HomeImprovement! Do you remember watching this episode? pic.twitter.com/HdSzL1VxJB

Alan comes on and performs the hit song “Mercury Blues.” Unfortunately, Tim, clumsy as ever, breaks off a piece of Alan’s car. Yikes! Alan shared a clip from the show and wrote “#Throwback to a little Mercury Blues on #HomeImprovement! Do you remember watching this episode?”

Fans replied to his tweet, saying that they loved that episode. Others wrote about the Mercury car, reminiscing about how they had one just like it back in the day. Turns out Alan and Tim both collect cars in their real life. They probably shared their love for old cars while they met during the episode.

After hearing Alan’s version of the song, Ford actually got the rights to use it in their commercials. You may remember some ’90s commercials for the Mercury featuring the song “Mercury Blues.”

Click for next Article
Previous article: Anthony Michael Hall Says A ‘Breakfast Club’ Sequel Was Once On The Table
Next Post: Rumer Willis Heats Things Up With New Photo Posing In Only Overalls