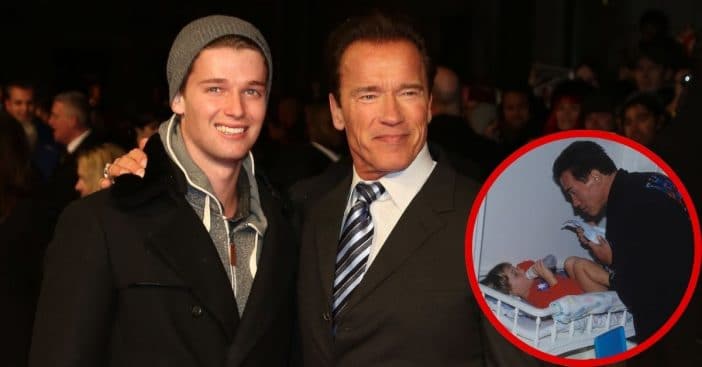 Come with him if you want to party. On September 18, Arnold Schwarzenegger celebrated his son Patrick Shriver Schwarzenegger’s 28th birthday. Like his father, Patrick is an actor, but also a philanthropist, as one of the founders of the clothing line Project 360.

Schwarzenegger was married to Maria Shriver, with whom he has four children: Katherine, Christina, Patrick, and Christopher. In 1997, the Governator also fathered another son with a household employee, Mildred Patricia “Patty” Baena: Joseph Baena.

Happy birthday @PSchwarzenegger! I love you, I’m proud of you, and watching you grow every day in every way is one of my greatest joys. Your business is booming, your acting career is taking off, but most importantly, you never forget to reach out and help others. pic.twitter.com/3wvJzRjbdz

On September 18, Schwarzenegger took to Twitter to express his joy and pride for Patrick on Patrick’s birthday. Born in 1993, he turned 28 this year. “Happy birthday @PSchwarzenegger!” wrote Schwarzenegger, over two photos of a young Patrick with his father doting on him.

The message goes on, “I love you, I’m proud of you, and watching you grow every day in every way is one of my greatest joys. Your business is booming, your acting career is taking off, but most importantly, you never forget to reach out and help others.”

Helping people’s lives do a complete 360

Back in June 2012, Patrick Schwarzenegger, along with Nick Sheinberg and Kimberly Barth, launched Project 360. The creation is a clothing line offering apparel and accessories – and all new levels of awareness for important issues. Project 360 clothing and accessories all bear inspirational quotes related to whatever global cause the project is championing and that funds are being donated to. “It’s about more than clothing,” stressed Barth. “It’s about style and looking cute, but it’s really about making a difference and making a global impact together.”

Patrick explained that the idea for the philanthropic endeavor came to them during a women’s conference in 2008 “by just creating little rubber bracelets.” He went on, “It was really successful, and Kimberly was working at another booth and she came up and said, ‘These bracelets look great. I think we can expand from there.’ We always wanted to do something that gave back to charity. Fashion and wearing clothes is a daily routine for everybody. What better way to spread the word of giving back and philanthropic ways of life than to wear something that gives back to charity?”

Patrick also credited Schwarzenegger and his mother for instilling charitable values in him growing up. Wishing this “philanthropreneur” a happy 28th!