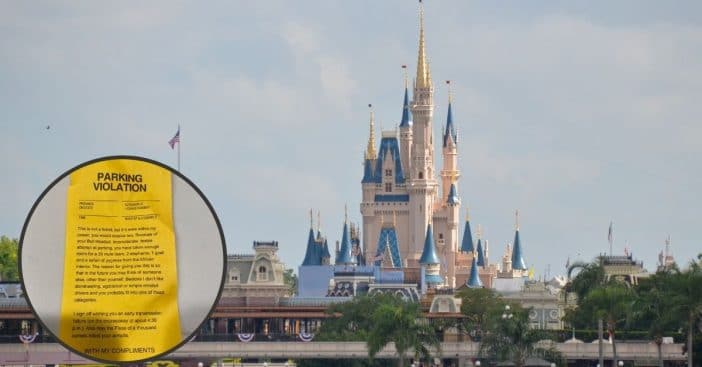 A mother visiting Disney with her disabled son ended up receiving a rude note because she had to take up two parking spaces. Tricia Proefrock spoke to Fox 35, explaining that she and her 13-year-old son, Mason, traveled to Orlando, FL to spend time at Disney World’s Magic Kingdom together. Mason has Lennox-Gastaut syndrome, which is a type of epilepsy that can affect a person’s ability to walk, talk, and see.

“When the side of the lot with ramp accesses are full, the only remaining spots have no ramp access,” Proefrock says to Fox 35. “Every single time out of dozens of trips, the cast members instruct me to take two spots, by parking directly on the white line. This gives me room to wheel my son out of the vehicle.”

Mom and disabled son receive the nastiest note of the century

Proefrock says that she didn’t enjoy taking up two spaces, but did as she was told to by the park’s cast members, another term for their employees. The rude note was left by a rather frustrated park guest. The note, obtained by Insider, said, “This is not a ticket, but if it were within my power, you would receive two… Because of your Bull Headed, inconsiderate, feeble attempt at parking, you have taken enough room for a 20 mule team, 2 elephants, 1 goat, and a safari of pygmies from the African interior.”

It continues, “The reason for giving you this is so that in the future you may think of someone else, other than yourself. Besides I don’t like domineering, egotistical or simple-minded drivers and you probably fit into one of these categories.” The note concluded with the unidentified guest saying that they hoped Proefrock got transmission failure and became infested by fleas.

Hoping to encourage compassion and understanding

She initially felt humiliated and ashamed by the note. “I was angry because I felt like the situation of taking two spots naturally sets us up to be judged.” She did tell a Disney employee, but little could be done about it. “I did let a cast member know the following day at Epcot that I had a ramp, and that someone had left the note the day before,” she tells Insider. “He was apologetic but could not offer any advice except again, to take two spots.”

Proefrock says she wanted to share her story to encourage compassion and understanding from others. “So, if you see a car taking two spots, maybe instead of wishing us a broken transmission, you can try to think about WHY a wheelchair accessible van in a medical parking section might need 2 spots.”

Click for next Article
Previous article: The Next ‘Indiana Jones’ May Have A New Lead
Next Post: Michelle Phillips Reminisces About Being In The Mamas & The Papas And ‘Knots Landing’